Working with the Achuar in the Deep Amazon

“Wiyu and Leon are well, they are happy”, says Cristóbal on Facebook and even though the message is a mix of Spanish and English, after a few exchanges we understand each other. He is in the rain forest and I am now back in Cuenca, Ecuador, where I’ve decided to live permanently.

I came to this country in 2011 and the following year I was on my way to the jungle to take up a volunteer post that I had spotted in London two years before. Talk about the ‘alchemist effect’… and a lasting effect at that. In the past five years, I have spent about six months among the Achuar, taught English and run teacher training courses at the Catholic University of Cuenca for almost two years, and now I am a ‘free radical’ working as an informal thesis director, proof reader and author, enjoying the flexibility that freelancing provides: the freedom to follow my passion – volunteering.

Cristóbal was my first Achuar student at Kapawi Eco-Lodge, which is situated by the Capahuari River (off the Pastaza) and is now fully run by this indigenous tribe of seven thousand people living in (around) eighty-five communities. Cristóbal is talking about his sons; the older has now started primary school ten minutes downriver from the Lodge. During my time there, I taught the three highest grades of the primary as well as students from all three years of the secondary school. I also taught staff at the Lodge starting from the resident manager through to the Achuar guides and finishing with those in maintenance and housekeeping. 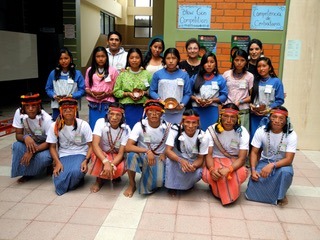 Not that there were that many students at all. When I took foreign tourists from the Lodge to observe my classes and engage with my students, after their individual mini-presentations, I often had to combine all the ‘bachillerato’ groups to have at least twelve of them with their heavy, cedar wood desks arranged in a horse-shoe shape. That was an eternal struggle between us: students are used to the medieval classroom set up, moving their desks as far to the back as possible, and neatly one behind the other, so that it’s easy to ‘hide’, and difficult to establish eye contact. ‘If you don’t want to look me in the face, look at a point on the whiteboard behind my right shoulder’, I would tell them and stick a whiteboard marker in their hands to act as a microphone when they were not speaking up.

I often wondered how it was that you go to a strange place where people wake up at four in the morning to have a cleansing ceremony, by drinking the beverage made from the leaves of the wayusa plant (a strong antioxidant when brewed as tea), and then have chicha, the ever present fermented manioc drink, take part in the ayahuasca ritual including its out-of-this-world hallucinations, and still (just like in Ethiopia where I worked as a volunteer for almost three years), everything is completely ‘normal’ and the human condition is basically the same. Your students can be bright or less so, some of them are cheeky, others are quiet and withdrawn, your Achuar colleagues are driven or laid back, while among the members of the community you find the honest and truthful just as the shifty and the ones that are too clever for their own good.

I came because I was asked to take on a volunteer assignment. The programme I worked for recognizes the fact that Ecuadorian English teachers want to move closer to the cities rather than further away, especially not as far as the Amazonian jungle without electricity, running water, flushing toilets, shops and any kind of entertainment that they are used to in towns. 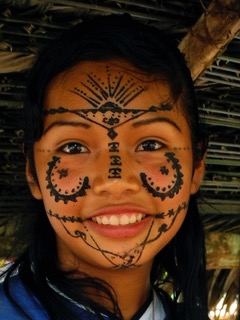 grades, but these classes only happened when there was a volunteer English teacher. To the credit of the project that started as a one-woman show, over the years we’ve had brilliant volunteers working with the Achuar in a variety of ways: teaching regular classes, doing language practice and methodology training with the teachers and reaching out to other communities through giving sessions to the employees working at the Lodge.

Why English, you could ask. Is this not just another sign of globalisation, one more imposition on an indigenous community, the members of which are happy to work in their sacred gardens (their chakras), carry on hunting and fishing and going to the jungle for their initiation ceremonies?
The fact of the matter is that the Achuar have been exposed to contacts from the outside world starting from the 1970s, when the first missionaries arrived. By now, there is a subsidized branch of the Ecuadorian state airlines that allows the Achuar to fly regularly to the nearest town, Puyo and travel beyond. There is no going back: the interface is only going to expand and the interaction is becoming ever more complex.

In 2014, we organized an Achuar cultural festival in Cuenca, a town that is hundreds of kilometres from the jungle where the fourteen students (and their teachers) came from. Many of the students hadn’t flown before, so it must have been a mind-boggling experience for them. Others had travelled as far as Quito before, but none of them had the kind of exposure that came about through three days of presentations (including face painting and encouraging spectators to try the 3-metre-long blow gun). It was a meeting of two very different cultures and the start of an intense experience: one of the Achuar students stayed behind and lived with me while going to a college for tourism in Cuenca and attending extra English classes at the university where I worked at the time.

Olger returned to the rain forest after a year and is now working on an eco-tourism project in his own community. Speaking some English is a must for the new generation. Not only is it a requirement by the government (English proficiency levels are low in the whole country says relevant research), but the Achuar will need English whether they stay in the jungle or move away from their ancestral land.

Those running the volunteer programme that I have been involved with are acutely aware that we should tread lightly. The presence of foreigners in the community necessarily changes the dynamics and sometimes it is hard to say whether our influence should be called meddling or facilitation. The guidelines before taking up our posts define how we should perceive our roles and how we should adapt to the needs of the community that are vocally expressed in the frequent meetings, when the chicha bowls are being taken round and offered relentlessly by the otherwise reserved female members of the Achuar.

Some of the young men and women from my classes of years ago have already left the jungle and started working in restaurants and hotels. For them, English is a bonus and this is also true for those whom they have left behind. At least one student of mine, an Achuar guide, has now enough English to communicate effectively, so that when the Lodge is unable to supply a so-called ‘naturalist’ guide from Quito, he can step in and perform really well. Eco-tourism projects are springing up, a small ethnographic museum was started in one of the communities and in Kapawi we now have a palm-fronded, pretty hut where Achuar jewellery and pottery is displayed for tourists to buy.

Teaching English under these circumstances is a unique affair. Resources are limited (we may have them to start with, but then they run out and are not replaced, so the service – think printers and photocopiers – becomes unsustainable) and, by default, we teach ‘unplugged’. Jeremy Harmer would be happy to know that the principle of ‘It’s all about you’ (meaning the learners) had been applied here even before we listened to his webinar. We are using a course book that has been written by volunteers; they have created materials rooted in and describing the students’ life experience. The drawings were made by the Achuar themselves. Owing to the daily routine of creating intricate face paint designs, they are excellent when it comes to minutely depicting the flora and fauna around them. Obviously, over the years, we have shared our culture with the students: some volunteers taught pop songs, others held peripatetic classes in the jungle and appealing to the Achuar’s passion for football and volley ball, we even had a volunteer who taught the girls how to lead organized cheering.

‘Maketei’ (thank you) is one of the words that you learn early on in the jungle. There is so much to be thankful for, when you are surrounded by stunning sunsets on the river and can listen to the sounds of the jungle (that tend to be louder during the night than during the day), see the electric azure of the blue morpho butterfly, and listen to the songs of Achuar women (an acquired taste) as they sing to their plants while working in the garden, or humming a lullaby to their children, including a special song (anent) asking for their forgiveness if they were rash and impatient.

I go back to visit the Achuar as often as I can and I am planning a short trip this year in September, when I hope to take the following assets with me: 1 volunteer English teacher (a lady of Turkish decent, which is a first), 1 water filter fundraiser and demonstrator, 4 water filters, 10 small solar lamps, 5 dictionaries, bags of second hand clothing and my good self. The jungle grows on you and, to this day, my connection with the Achuar is as strong as the woody vine they use for so many purposes – solid and unbreakable.

Erzsebet Bekes is a Hungarian English teacher. She volunteered in Ethiopia setting up English Language Improvement Centres. She taught English to members of an indigenous Amazonian tribe. She is now a freelance teacher trainer in Cuenca, Ecuador.

By SHARYN COLLINS Giovanni where were you born? I am Italian. I was born in Palermo but, as my father was in the army,…