Recently teenagers have been accused of being unable to socialise face to face, think and even make eye contact. Parents and adults in general put the blame for the lack of communicative skills among teenagers on social media.

However, new technologies have always provoked generational panic, which usually has more to do with adult fears than with the lives of teenagers themselves.

Actually, a recent study has found that the most avid texters are also the kids most likely to spend time with friends in person. It seems clear that one form of socialising doesn’t replace the other. Moreover, social scientists who study young people have found that their digital use can be inventive and even beneficial. This is true not just in terms of their social lives, but their education too. In fact, thanks to the online world, young people can now publish ideas not just to their friends, but to the world. And by writing for strangers, their sense of “authentic audience” makes them work harder, push themselves further, and create powerful new communicative forms. 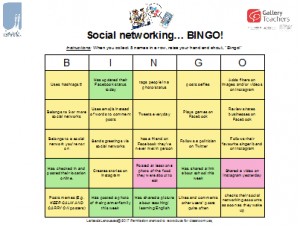 Instead of blaming teenage students for their “bad habit” why don’t we use it to make them improve their EFL skills?

Ask and answer questions using present simple, past simple and present perfect simple (they are distinguished by different colours on the cards).

RULES OF THE GAME

It is important that you show an example with one of the students because the focus on target language is to ask you-questions but on the cards they will find the third person singular.

E.g. Maria: Do you use hashtags?
Simone: Yes, I do
Now Maria can write Simone on the card. E.g. Simone uses hashtags.

At the end of the game, students remember each other’s names better and they usually befriend each other on social networking apps, too.

Larissa Albano has been an EFL teacher in Italy since 2009. She set up her own language studio in her hometown in 2011. She teaches mainly teenagers and adults in small groups. Her teaching approach is based on a variety of learning styles and she combines the use of everyday life objects, games and technology to make her lessons effective and memorable.

By Raquel Thoesen The summer of 2014 looked a bit different for me than for most other university students back home. It took place…