Ken, we come from the same city of Newcastle upon Tyne England, share the same surname and have known each other you since you were twelve years old because of your friendship with my son, but who would have thought I would have been doing this interview with you today? 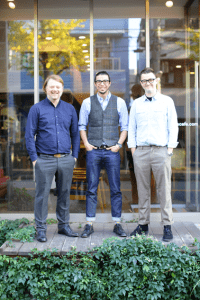 I know, life can be very strange, but I think you have had more influence on my life than you know. I remember sitting in a café with you when I was 21 wondering what I was going to do with my life and you suggested doing a TEFL course.That was in 1998. I applied to International house but failed the initial entrance exam for the course. I’d had a good education and yet I had absolutely no idea about my own English grammar. Anyway I pulled my socks up, got on the course and thoroughly enjoyed it. I can’t remember it being too hard and I had a load of fun and made some great friends.

What did you do after that? Did you start teaching straight away?

No, I was still in fun mode and so went to Hawaii for a year and learnt to surf. I am half Japanese on my mother’s side and I speak the language fluently, so I gravitated towards Japanese people and being broke, I thought I should go and try teaching in Japan. My first job was with a language company called Nova. Some of your readers might know it. It was a very big all over Japan.

I started as a part-time instructor working Monday to Friday, 5pm to 9pm with the weekends off; great shift for a twenty one year old. I didn’t have to get up until noon, had four lessons a day, and weekends off! I rarely saw daylight. This was during the boom of the Eikaiwa industry in Japan, so the salary was also very good for the work I was doing.

What was your plan in Japan?

The plan was to stay in Japan for a year, gain some teaching experience and then return to Hawaii and work as an English teacher out there. I had a green card, so I thought that there would be no problems . . . Unfortunately, being 21 years old and a little irresponsible, I neglected to do any research into the rules of the green card. Had I been a bit more switched on, I would have known that if someone leaves the U.S. for more than a year, said person’s green card expires. As you can imagine, this came as a bit of a shock but as I was loving life in Japan, I wasn’t that disappointed. I stayed in Japan, continued to work at NOVA, moved from part time to full time, became a trainer and after about 4 years, I moved to the head office and worked in the department that looked after teacher’s apartments.

So you left teaching?

Yes, I liked the company but after four years I just needed a new challenge. Now I was basically liaising between teachers and apartment owners / managers dealing with complaints and tenancy renewals. It was a good opportunity to travel around Japan and also use my Japanese in a business environment. However, you had to have a sense of humour, because some of the complaints we received from landlords were hilarious; instructors throwing up in other tenant’s apartments, fireworks from balconies and of course countless noise complaints.

It wasn’t all fun though was it?

Indeed it wasn’t, something very sad occurred. A young British girl named Lindsay Hawker was murdered by a young Japanese guy and I had the sad task of packing up her belongings to send home to her parents. That was probably one of the worst things I have ever had to do.

How long did you work at Nova?

In total 8 years, four as a teacher and trainer and four in their accommodation department. Sadly NOVA went bankrupt and I found myself without a job. By then, I was finally maturing and I had a lot of experience dealing with Japanese students. At Nova I had made friends with two British brothers Adam and Ross. After losing our jobs we spent a bit of time sitting in cafes discussing our futures and at one of those gatherings Adam suggested we start our own business by opening an English language café. I thought it was a great idea and I became a partner.

So why a café instead or a conventional language school?

While there had been many good aspects at Nova, one of the things that we all didn’t like was the distance between the teachers and the students. In the larger schools, it was rare to see the same student more than once and you never really developed a relationship with your students. It was different in the smaller schools but even then, as the rule was “no fraternization with the students”, it was difficult to really get to know them. By establishing a school within a café, we felt we could create a learning atmosphere, which was more relaxed, where students could hang out and where we could form a community and actually know our students.

We also wanted to focus more on the individual students’ needs, which is a little difficult in groups where all are on the same page of the same text, so we started out as a predominantly one to one school. These days we do offer small open group classes for beginners and pre-intermediate students but we still mostly teach one to one and our students seem to love the individual attention.

Did you have investors when you were first starting the business venture?

No, there were just the three of us. We opened the first place in Miyazakidai in Kawasaki city. It’s about twenty minutes from Shibuya. The second is a couple of stations along the same train line in a place called Mizonokuchi. Both places used to be restaurants, which we renovated. (a lot of it ourselves) I wouldn’t say it was a gamble but more of a calculated risk. We had the experience of teaching, had a clear vision of what we wanted to do, along with a plan to get there, and we spent a long time looking for what we thought was an ideal location. Cubes is a school that has the look and feel of a cafe. A lot of students learn in sterile, office style environments which aren’t very natural but we wanted something that was more fluid and would offer students something a little closer to speaking in the real world.

I was fortunate enough to be able to visit you in Japan and stay in your lovely Japanese house in 2005, and I thoroughly enjoyed my curry with homemade scones for dessert in your café language school. It seemed to be very slick. Did it go well from the start or did you have teething troubles?

I remember your trip very well. Yes, there were a few teething troubles. As we wanted to have a café atmosphere, we started out with way too much on our menu, We had sandwiches, pasta, quiche etc, typically English café food. Basically we spread ourselves too thinly and tried too hard. We would be teaching for one hour and then making a full English breakfast for the next. When I think about it now, it was a nightmare. Buying the ingredients for the menu was pretty pricey too and not a lot of profit in it, especially if the partners were eating most of it! After a while, we realized that we had to focus on the English lesson side of the business and the menu was quickly whittled down to a very simple drinks menu. Surprisingly the students still seem very happy.

How many students do you teach per week?

We now have twelve teachers and we get about one hundred students in the Miyazakidai café and probably double that in Mizonokuchi. We also now do some offsite lessons, and as mentioned before some small and large group lessons as well. Last month, I did a couple of big ones; one with forty students another with two hundred!

What does the future hold for Cubes language café?

I feel we are still in the early stages, although we have been going for eleven years now. We all realize that to survive in the private language sector we need to be innovative, move with the times and at the same time ensure that we deliver quality lessons to satisfied students. We are constantly developing and have started to focus on business contracts, which can take place off site in companies or in the café itself. The language café concept has proven to be very successful and I would like to think that we’ll open a few more in other areas of this amazing city which I have made my home. It’s a far cry from my childhood in Newcastle but I couldn’t be happier.

Sharyn Collins has a degree in linguistics and speaks several languages fluently. She has worked as an EFL teacher for many years in countries including Bahrain, Oman, and Mexico. She now works as editor of EFlmagazine.com.