My Tailor Is Not So Rich: Salaries and Conditions of ELT Trainers In France

This post represents something of a departure for EFL Magazine. In our continuing effort to provide new, interesting, and useful content to our readers, we are proud to present this study preformed by Bethany Cagnol, Claire Oldmeadow, Jane Ryder, Andrew Wickham, and Ros Wright. It reveals new information on the salaries of ELT trainers in France, and their economic concerns. We hope that this study will spark some discussion on salaries and working conditions, not just in France, but among ELT teachers as a whole. -Editor

In 2014 we conducted a survey to investigate the real conditions and concerns of English language trainers who, at 80%, represent the majority of language teachers within the training market in France. We were primarily interested in the point of view of expats for whom language training is a career*.

We polled some 800 trainers English language trainers across France; a representative sample of approximately 10%. Based predominantly in the Paris, Lyon and Toulouse regions, 66% possessed 10+ years’ experience in language training. Almost 1/3 indicated that being a native speaker, having professional experience and/or a university degree are often 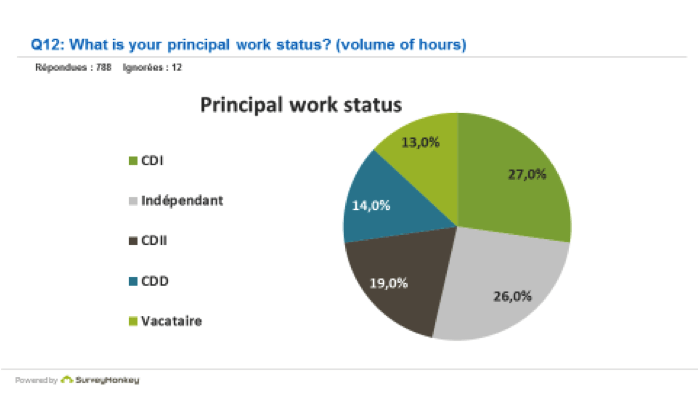 Private language schools represent the main employer (43%) of ELT trainers, while 27% of trainers work predominantly in higher education. Only one quarter work for a single employer. The majority, 45%, have at least three employers, while 16% juggle up to six different employers.

Just under half have a continuous employment contract (CDI or CDII) as their main status, which means that 54% of trainers have no job security. Roughly a quarter work predominantly on a freelance basis, while 13% are mostly employed on fixed-term contracts (CDD) and 13% are mostly employed as vacataires: the equivalent of zero-hour contracts with minimal entitlement to sick pay, benefits and holiday pay and no unemployment benefits. The insecurity with these contracts is further compounded by additional administrative duties. 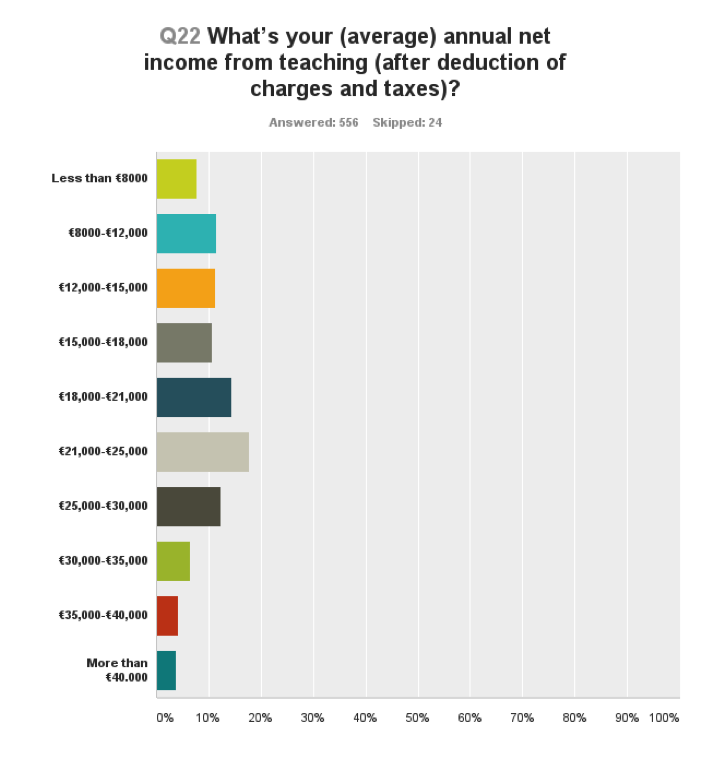 Hourly rates are notoriously low. We found 1/3 earn less than 20€ gross/hr and a quarter of those who derive more than 70% of their income from teaching, earning the minimum wage (currently set at €13,500 net/£XXXXXXX a year) or less.

Hourly rates for self-employed trainers indicated a huge disparity, with those at the top billing more than €50/hr. Rates at the lower end of the scale tended to be around €30/hr.

In the final section of the survey, respondents listed their principle concerns. Over 50% stated working conditions had deteriorated. This is further aggravated by lack of security, which in turn is due to the prevalence of fixed term and zero-hour contracts as well as a cap on the number of hours a year trainers are entitled work under such contracts.

For self-employed trainers, lack of income security and limited benefits are major concerns. Finally, the precarious nature of the profession means that few qualify for a full state pension and are forced to continue working past retirement age. 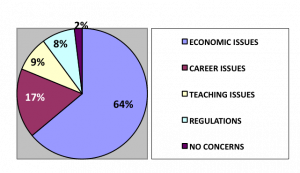 Other areas of concern included bureaucracy and the constant fluctuation of employment and training laws. Finally, respondents expressed concerns about adapting to new technologies.

Following the January 2015 reform on vocational training in France, we carried out a complementary poll in May to assess the immediate impact on trainers. Trainers working with private language schools or working directly with companies are being hardest hit by the reform.

It would seem that unlike the initial phrase from the 1929 coursebook, L’Anglais sans peine, known to entire generations of French learners, my teacher is [sadly not] rich and it is doubtful (s)he will become so in the near future. That said we felt it was important to first provide clear, reliable evidence of the situation on the ground. It is our fond hope that this initiative will encourage a wide ranging debate among trainers, institutions and publishers, lead to further research being conducted in other countries and to a search for positive, realistic solutions.

*The survey excluded state education teachers, as their conditions could not be compared to those of trainers working with adult and young adult learners.

As experienced ELT specialists in France, we have long been concerned about the precarious nature of our profession. The proportion of those working on base-rate salaries, with relatively low job security, juggling multiple statuses and employers, is by all accounts on the increase. In the summer of 2014 we conducted an online survey to investigate the real conditions and concerns of language trainers. This article is a summary of that research.

Bethany Cagnol has a BA from the University of Virginia, USA, and an MA in Teaching Second and Foreign Languages from the University of London Institute in Paris. She was the president of TESOL France, (Teachers of English to Speakers of Other Languages), and currently serves on the boards of IATEFL BESIG (International Association of Teachers of English as a Foreign Language Business English Special Interest Group), and the IATEFL Conference Committee.She's written materials for Cambridge University Press, Pearson and Cornelsen.