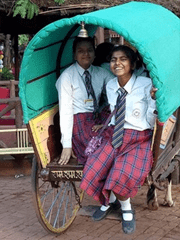 I teach English as a second language in an International school in India. It is a well known fact that technology in India is booming and it seems to me that every young man or woman these days seems to want to start a tech company or be the next Bill Gates.

Therefore it’s not surprising that attempting to teach children how to appreciate the great poets of the past is indeed a challenge and one that I readily rise to, as it is so important to appreciate the beauty of the spoken word, when the English language seems to be in the process of erosion and massive change.

In addition, as a teacher I feel that we have a duty not only to teach our children facts but even in a second language, to teach them to reflect and think deeply; life these days often seems so superficial.

For a poetry project I used the poem The Road Not Taken by Robert Frost.

Two roads diverged in a yellow wood,
And sorry I could not travel both
And be one traveler, long I stood
And looked down one as far as I could
To where it bent in the undergrowth;

Then took the other, as just as fair,
And having perhaps the better claim,
Because it was grassy and wanted wear;
Though as for that the passing there
Had worn them really about the same,

And both that morning equally lay
In leaves no step had trodden black.
Oh, I kept the first for another day!
Yet knowing how way leads on to way,
I doubted if I should ever come back.

I shall be telling this with a sigh
Somewhere ages and ages hence:
Two roads diverged in a wood, and I—
I took the one less traveled by,
And that has made all the difference.

The poem explains that our paths in life may often diverge and choices will have to be made; choices which will determine our destiny.

I wanted my students to be aware that the easy choice is not always the best, and that whatever path we choose, there will always be a doubt that the other path may have been the better one, but, as we are responsible for our actions, we must accept the consequences of our decisions and learn to cope with regret.

One way of developing understanding was to put the students into groups where they were allowed to discuss and argue and agree or agree to disagree on the lessons contained in the poem.

The following are example of the work which came out of the lesson. Keeping in mind that the learners have English as a second language and still struggle with competence I think they did extremely well and I am delighted to share them with the readers of the magazine.

Shimmi Sharma is working in a K12 school in Varanasi, the holy city of India. This city is known for its cultural and spiritual heritage. She has been a teacher of English in Sunbeam School Lahartara Varanasi for the last 10 years. She is a Post Graduate in Education, English Literature, General English and Psychology. She has a Post Graduate Diploma in Higher Education and PG Diploma in Teaching English as Second Language and in teaching Functional English and right now she is pursuing TEFL.

A long time ago I realised that empowering my students is my mission. I use various resources to achieve this: inspirational stories, videos, poems,…