Sound effects are often heard in movies and TV shows . The sound of footsteps or breaking glass can heighten the drama and enhance the experience we have watching the events on-screen. However, teaching with sound effects can also be used to stimulate thought and discussion amongst students in ESL/EFL classes. Instead of using dialogues or monologues, teachers can construct a listening lesson around sounds. In this article, I will talk about using sound effects in the ESL/EFL classroom.

The most well-known ESL/EFL activity that involves sound effects is the sound sequence. Here’s how it works: Students hear a series of sounds, and then work in groups to produce a story based on their interpretation of what they just heard. This is a very simple, yet engaging way of getting students to produce an inventive story. When I use this activity with my students, I’m always amazed by how creative the stories are.

Sound sequences first appeared in two books by Alan Maley and Alan Duff, with the brilliant titles Sounds Interesting and Sounds Intriguing. They came with a cassette (remember those?) of sound effects for the activities in the book. Unfortunately, these Cambridge University Press titles from the 70’s are long out of print. Mario Rinvolucri wrote up an unplugged version of a sound sequence, published over a decade ago in Humanising Language Teaching webzine. He also included a sound sequence titled “From Sounds to Mumblings to Stories” in the book Imagine That! (published by Helbling Languages), which he co-authored with Jane Arnold and Herbert Puchta. This book included an audio CD with the sound effects for the exercise.

For teachers who want to try out sound sequences in their own classes, I can think of a few options. One is to follow the advice of Mario Rinvolucri in the article linked above, and create your own sound effects live. (Perhaps if you excel at this you might consider a second career as a foley artist.)

Another option is to go online and find sound effects websites where you can download sounds for free. Here are a few examples:

One more source is your smartphone. Search for sound effects on your smartphone, and you will find an impressive number of apps to download and use in class.

Now, a few random (very random) sound sequences I generated, using descriptions of the sound effects on the websites mentioned above.

Which of these four sequences do you think is the best?

Can you think of a better arrangement of the sounds?

A recent twist on the sound sequence involves playing the audio portion of a short video and asking students to describe what sounds they heard, ultimately leading up to watching the video and audio together.

Processes and Passives from TEFLGEEK

This lesson from the brilliant Jamie Keddie begins with collocations that describe sounds, then hearing the sounds from an advert, and finally watching the advert.

Other than sound sequences, how can sound effects can be used in an ESL/EFL class?

Students can listen to individual sound effects and give their own descriptions, using sentence starters such as “It sounds like…”, “It could be…” “I don’t know, maybe it’s…”

Students can draw a picture or a series of pictures suggested by sound effects. Later, students can present their pictures to the class.

A teacher can elicit some common problems faced by students. The the teacher can play a series of sound effects, and students can suggest some connection between the sound effect and a solution one of the problems.

For more ideas, I strongly recommend the work of Mike Harrison (The Sound Book). He has produced a website full of imaginative activities for using sound effects in the ESL/EFL classroom, including sound sequences and many other novel ideas.
(This article is a revised version of a blog post on Hall Houston’s blog, A Teacher in Taoyuan from 2010.)

Hall Houston currently teaches at National Taipei University of Nursing and Health Sciences in Taiwan. He has a Master’s degree in Foreign Language Education from The University of Texas at Austin. He has conducted presentations and workshops for Cambridge Assessment and British Council. He is the author of numerous articles and several books about ELT including Provoking Thought and Creative Output. 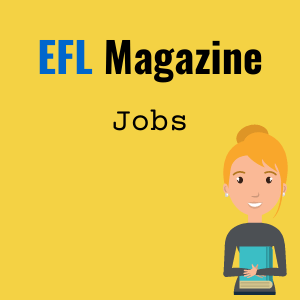 How learning a language can benefit your teaching My major embarrassment as an EFL teacher is not being fluent in another language. However, all…