As foreign language teachers, we are aware of how big the “native speaker” controversy has become and somehow, we, consciously and unconsciously, reflect this in our teaching practice. But, what does “native speaker” even mean? What qualifies a person as a native speaker of a target language? Clearly, there are several definitions and positions over this matter but I agree with Professor Anita Lewicka’s interpretation of the TEFL Equity Advocates and Academy in which:

“If you happen to be a native speaker of a given target language, you were most probably born in a country where the target language is the official language.

You are most probably this country’s passport holder. You may have been educated following this country’s national curriculum, in which the very target language (being your mother tongue) is the norm. You may have observed festivals, customs and traditions typical of the country of your birth, of your upbringing. You must have used the language on a daily basis, both at school and at home. On top of that, you must be absolutely immersed in the target language (your mother tongue), in your country’s culture and history, which enables you to easily identify with the people of your homeland, their mentalities, their virtues and vices…”

Watch this if you have an ELT business

Do the expressions “if a native understands you, it means you are a proficient speaker”, “being mistaken for a native speaker is the ultimate goal to achieve when learning a new language” sound familiar to you? These types of statements that we often listen, read and even say to our students are a clear sign of how both, teachers and learners idealize the conception of native speaker and native speaker accents. Actually, if we go through the teaching materials (course, grammar books, dictionaries, etc.) in our classrooms we can easily find these do not reflect the different varieties of English or the speakers who the learners will meet in their daily lives once immersed in English-speaking settings.

As an EFL teacher from Venezuela, I realized this when speaking to one of my most prominent and proficient students in terms of the use and practice of communicative skills and language awareness. My student told me about a communicative exchange she had recently experienced with a native English speaker who had found herself lost. The lady, having failed to communicate herself in Spanish, turned over to English and as they were speaking, the lady identified her (the student) as a native English speaker too. As her teacher, my unconscious and immediate response was to congratulate her and to feel proud of her because of the well-known assumption that if you are mistaken for a native, you are indeed, a qualified user of a particular language.

At first, glance, if a non-native speaker is mistaken for a native one, it is an achievement. As foreign speakers, we immediately feel that our skills are accurate and we assume that the language learning journey we have gone through has finally paid off. These may be the first thoughts that come to a foreign speaker’s mind and it is not wrong, but as learners, this cannot be our goal. Being mistaken, probably means that you are able to pronounce following the phonetic and phonological established patterns of a particular language, and speak with a specific accent as a result of all the languages or accents you have been exposed to. So, this is the way people often assume knowledge of where the speaker comes from.

English as a Lingua Franca

Based on what I have previously said, “native speaker” and “non-native speaker” labels do no longer seem to fit nor to be well-justified because they put all the focus on the speaker’s origin rather than his or her ability to genuinely establish communication. Now that English has arisen as the international tool to communicate with each other, it would be fair for both teachers and learners to open ourselves to the vast varieties of English that have started to emerge, leaving aside the assumptions that American or British English, for example, are superior, essentially when languages are clearly shaped by their users.

“In terms of the English language specifically, its rapidly growing dominance as the world’s main lingua franca is leading to both increasing diversity in the way the language is spoken, and to corresponding attempts to limit the diversity by the continued ‘distribution’ of native speaker norms to an ever-larger number of English speakers” Jenkins, J (2007).

After all, accent, it is not a suggestion of language proficiency and this is where the situation becomes a debate, because being a native speaker of English, in this case, does not mean one is a better user or simply better at communicating. As a matter of fact, due to the extensive scope of English as a Lingua Franca (ELF), forcing standard varieties of English like the American and British should no longer be the only path to follow when teaching English, especially in English as Foreign Language contexts. Because of the rapidly increasing number of speakers from all over the world who have English at their disposal as a second or foreign language, teachers should promote awareness that “it would make sense for English language teaching to move away from its almost exclusive focus on native varieties of English.” Jenkins, J (2009).

This fascination with believing that native English accents represent indeed “authentic English experiences” goes far beyond what we truly find in global exchanges since they do not focus on the speech and communicative abilities of users of the language. Having said that, once we consider that language learning seeks for communicative competence (to make meaningful communication) by using the language:

I. Accurately, the precise use of words and structures,
II. Appropriately, as the ability to identify different social contexts e.g. knowing when to say “Can I have some water?” vs. “Give some water!” and
III. Flexibly, referring to the capacity to organize a message effectively and to compensate for any difficulties via strategies, Yule, G (2006).

“Sounding” like a native when speaking does not actually satisfy the need for communication. For this reason, teachers from both ESL and EFL environments should raise learners’ perspective on English as a Lingua Franca by providing them with the opportunity to be exposed to authentic material (using podcasts, DVDs, etc.); where they can get to know the global varieties of English and consequently change their attitude towards other accents like Indian, Australian, French or Chinese English to name a few. 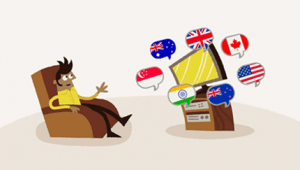 What I have shared above does not mean one is superior to the other, on the contrary, it should lead us to finally put an end to the distinction between speakers due to their accent, and inspire us, both teachers and learners to seek communication, to use our language abilities and languages we know to simply bring people together, not to separate them.

To the student I mentioned in this text; yes, you do have to feel proud of your English language journey but you cannot “sing victory”. Language learning is an experience filled with many wonders. Every day we find ourselves involved in different, simple but at the same time complex and wonderful real life communicative situations, from which we can continue to learning and improve. It is not as if we can dare to say:

“I have finished learning English!” especially when like everything else in nature, the English language is a work in progress. It keeps evolving, changing, adapting to the needs of its users and therefore, pushing and inspiring us to step up our game.

To the rest of the learners and teachers who are reading this article, I encourage you to finally acknowledge that our communication skills, our ability to genuinely engage with others does not rely on our accent and that our goal as language learners is not “to sound” like a native but to be a proficient user.

Finally, the native-speaker debate is bigger than what this simple piece showcases, it requires a broader insight. In fact, many professionals have taken time to clarify it for over more than a decade. Therefore, I wholeheartedly invite you to reflect over this matter, whether you are a second or foreign language learner or teacher, all us of who are involved in the outstanding and beautiful world of languages have something to say.

Laura teaches English as a Foreign Language in her hometown Coro, Venezuela. Experienced in teaching in both public and private schools, she's now teaching in a private institution. She has taught students of different backgrounds, ages and levels focusing on promoting communicative competence. Having participated in teaching projects with EF: Education First, Cambridge English Teacher and the Oxford University Press as a part of her professional development, she's interested in Second Language Acquisition, Language Skills Development and more recently she has started to engage in the study of English as a Lingua Franca and the notion of Global Englishes.