A couple of days ago, a colleague, (Marek Kiczkowiak) posted something on the IATEFL Facebook group about why someone should have to be a member in order to present at the conference (click here to see the thread). Countless comments followed, but there was one by Joel Josephson which interests me here.

It read ‘They want your money, all the rest is BS. It’s also bad education’. Some were surprised about why I ‘liked’ the reply at the time, despite the fact that I think it is somewhat unfair; the thing is – and this is what I would like to argue here – that we need people like Joel.

Watch this 2-min clip (click here). It shows the famous line experiment by Solomon Asch. The study I am going to describe here (Nemeth & Childs 1988) is very similar to the original, but there is a tweak in the second condition. So imagine you have agreed to take part in a study… 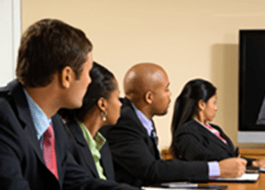 You join a group of another three people (what you don’t know of course is that the others are stooges). You are the last in line. The researcher projects a slide on the screen and asks what colour it is. It is obviously blue. All three people say ‘blue’ and so do you. The process is repeated 20 times.

Each time the slide is a different shade of ‘blue’ and everyone agrees. Then you all have a little break and you join some new people (again stooges) for another round. This time the first slide is red.

To your amazement, the first person says ‘orange’ – and so does the second and the third! And this is repeated 20 times! What do you say? Well, in the experiment, just as in the original Asch study, most people actually succumb to group pressure and say ‘orange’ 14 out of 20 times – despite the fact that they can clearly see the slides are red. But what if things were a little different? 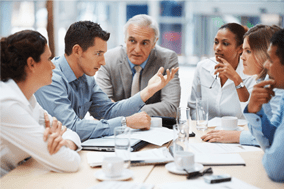 Again imagine you have been invited to take part in a study, you join another three people (who are in fact the researcher’s assistants) and you sit through the first series of blue slides. This time however, there is a crazy guy among the other three; there may be something wrong with his eyes, but every single time when asked what colour the slide is, he says ‘green’.

The others of course say ‘blue’ and so do you, but the crazy guy carries on regardless. There follows a break and, just as in the first condition, you join another three people (stooges once again). The researcher projects a red slide and, one after the other, all three of your group mates say ‘orange’. And this happens 20 times in a row with different shades of red. What do you say? Amazingly, this time the actual subjects defied the majority calling out ‘red’ 17 times out of 20.

It is important to note here that in the study above, people did not actually know the others and would never see them again. Imagine how much greater social pressure is in the school you work in, or within the community you would like to belong to.

The title of the study (‘Modelling courage: The role of dissent in fostering independence’) perfectly captures the take-away. We need such people. We need dissenters. We need people who will not toe the party line but will question authority and the status quo. Even if these dissenters can sometimes be difficult individuals with axes and miscellaneous other implements to grind and with various chips on either shoulder. Even if they are just doing it in order to show off (Interestingly, in my experience most such people tend to be men…  ). And the reason we need these people is that dissenters make it easier for others to speak their mind. Dissenters legitimise dissent.

Does this really matter?:

It seems that it does (click here for a very persuasive 10-min TED talk by M. Heffernan). In a business context, studies have shown that 85% of workers felt unable to raise an issue or concern to their bosses, even though they felt the issue was important (Milliken 2003). So serious is this problem in fact, that a manager has made it a habit to have a ‘plant’ during meetings, a confederate whose sole job is to raise awkward questions; this ‘pops the cork’ and shows the others it is safe to disagree. Excellent! (Heath & Heath 2017 – p. 191)

Teachers and learners tend to perceive Phrasal Verb as difficult to learn, particularly as they seem to have so many alternative meanings, yet they…