I have been using this activity for well over twenty years, but am really unsure of where it came from. I would love to credit the author so if anyone knows the original please get in touch. 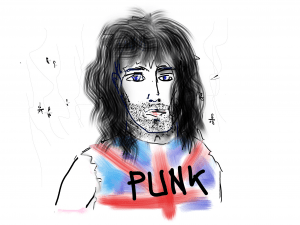 The following is simple yet effective method of either introducing or revising, or just jogging the memory, of modals for advice; ‘Should/Shouldn’t’, or ‘Ought to’, and maybe ‘If I were you…’ for per-intermediate level but has also proved very useful in looking at ‘Must’ and ‘Have to..’ for advice and obligation at Intermediate level. It is also full of vocabulary dealing with hair, beards, shaving and also introduces the structure ‘to have something done’. This is best drawn on the board, a simple egg shape with eyes and mouth on top of a triangle would suffice, but for teachers who are nervous about their artistic abilities please feel free to use the images used to illustrate this article in a PowerPoint. Just remember that you will need to control when, and what, gets removed, to fit with your pre-loaded sequence.

Quickly draw (or use image 1) the head and shoulders of a young man, not quite life-sized. Make sure he…

Elicit a name (let’s call him Jack here) and go through a description of the man. The class should have little problem with the basics, but words like ‘stink’ or even ‘smelly’ might be new, as too ‘ripped’ or ‘torn’ for clothes. They also might want to say ‘beard’. As they are currently quite fashionable allow to be sidetracked to give them ‘soul patch’, ‘goatee’, five-o’clock shadow’ and so on, but ‘unshaven’ or ‘untidy stubble’ are the target words.

Once the class agrees Jack is one smelly individual, drop the bombshell that he is in fact a sort of friend to all, and they (the class) have just spotted him walking towards them in the street. Tell the class “You say ‘Hi’ and Jack then tells you that he has some news, he has a job interview! You congratulate him and ask where, and he says. ‘A bank’ (important!). So you look at Jack and think ‘he can’t go to a job interview looking like that, he needs help.’ What advice can you give him?’”

It is possible ‘should’ comes up quite early on, especially with an Intermediate group, but the best response is if they use an imperative such as ‘Go have a shower!’ as this gives great opportunity to show that although the comment is possibly quite justified in ordering Jack to ‘get real’ and smarten up, he is a friend so a softer approach is required. Once ‘You should have/take a shower’ is elicited rub out the flies. Ask about the hair. Possible response might be; ‘Jack, you should cut your hair’, so it is worthwhile asking if the student cuts his/her hair which naturally falls into teaching ‘have something done’. Find other examples among the class (or outside of it) – girls’ fingernails, tattoos, dyed hair and so on. Once they have ‘you should have your hair cut’, wipe out the messy hair and draw a neat, short version. 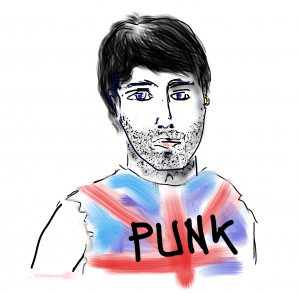 Now comes the ‘beard’. Because it is fashionable to have a three-day growth some students will opt for ‘trimming’ it, or making it tidy. Act concerned about this decision and see if other students naturally use ‘opinion’ English – very possible if they are studying PET – and say something such as ‘He should cut it off because he can grow it again in three days’. If this does not happen then it might be an idea to push, or force, the issue for practice. Remove the stubble. I usually make a noise like an electric razor and use the board eraser as if one. 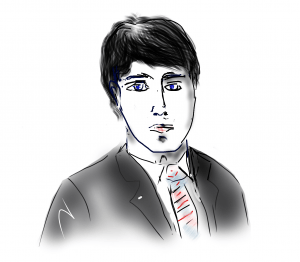 On the board is now a clean, shorn Jack but still wearing an earring and a ripped T-Shirt. The earring comes out quickly but take time with the clothes as the students will dress him in a shirt, jacket and so on (which is possible in a drawn version though not the PowerPoint version) but not the all important suit and tie. A bank would possibly not even look at a male candidate turning up for an interview without a tie. Once they arrive at the acceptable manner of dress, rub out the offending T-shirt and quickly draw a suit and tie.

An eager class will be frustrated by ‘should’ not being strong enough for an important interview and will want to use ‘must’ for actions like cutting the hair or wearing a suit. ‘Must’ and ‘Have To’ can be a bit of a minefield. I try and simplify the problem by saying that you can never be wrong, in any tense or situation, by using ‘have to’. Possibly point out that in Jack’s case the wearing of a suit is not really the class’s obligation to push onto him but the Bank can certainly say it in the application; ‘Suits must be worn’. Unless knowingly following this up – I once used it as an introduction to unit 4B of Intermediate English File 3rd Edition which did just that; A Friend in Need nicely leads into teaching obligation, so have exercises and grammar information at hand. The advice using ‘should’ about the earring, the stubble, even the shower could be ignored by Jack (at his peril!) but arriving at a bank interview with long, unkempt hair and not in a suit is just not correct. He has to do these actions.

It may be worth the effort to see what other advice is on offer by the learners beyond dressing him. For example he should:

I have prepared .jpegs that could used via an interactive whiteboard, put into a PowerPoint or even just printed as Flash Cards. Be aware though that apart from one image not having the earring the sequence is impossible to edit and therefore must be controlled. The advantage of the randomness of drawing is apparent and I urge teachers to try and draw. Whichever method please have fun with this simple but surprisingly quite rich activity and do let me know how it went.

I have prepared .jpegs in a Zip file that could be used via an interactive whiteboard, put into a PowerPoint or even just printed as Flash Cards. Go to right click on link then choose ‘save link (or target) as’. Be aware though that apart from one image not having the earring the sequence is impossible to edit and therefore must be controlled. The advantage of the randomness of drawing is apparent and I urge teachers to try and draw. Whichever method please have fun with this simple but surprisingly quite rich activity and do let me know how it went.

Approaching 30 years of teaching experience (Spain, U.K., Russia) Garry Smout has learned one valuable lesson: all students, even (especially) those that dislike you, are pure gold. Their needs, their wants, their motivation, or lack of, all teach you to teach. He is also the artistic editor, and one of the founders of, the online contemporary literary review The Barcelona Review.

Oh No! Videos are not just for watching In the present learning situation, technology is becoming ever more useful to both teachers and learners….