‘2 ½  Lessons that Smoking can Teach us’ 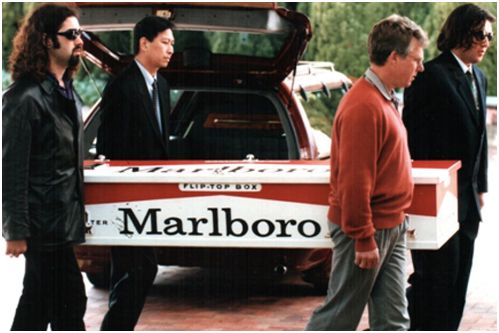 A funeral with a difference:  This is a real picture – from a real funeral.
Notice anything different? That’s right – it’s the coffin. But the question is hardly a taxing one; painted in the vivid, instantly recognizable Marlboro colours, and emblazoned with the Marlboro logo, the coffin is hard to miss. Inside it lay the honourable Serge Ferrier. A life-long smoker, he had stayed loyal to the brand till the very end, smoking a packet a day.  He died of lung-cancer at the age of 67. An original idea, a powerful image and a strong indictment against smoking, wouldn’t you say?

Two campaigns:  Smoking kills – we all know that. But how do you get people to refrain from smoking? Before moving any further, please watch both of the following ads (first click here, then here). Both come from anti-smoking campaigns. Which one would you say is more effective?

Think – Don’t Smoke: The first campaign started with the (correct) idea that most young people take up smoking as a result of peer pressure.
This is not something that they don’t know, but the ad reminds them of the fact and also that it shows a lack of individuality – you just copy your friends’ habits (‘monkey see, monkey do’). So the ad ends with an appeal to the rational part of the brain – ‘Think – don’t smoke’. How effective was it? Well, follow up studies showed that teenagers who had seen it were 36% more likely to smoke! Why? For two reasons: a) apparently being aware of peer pressure does not negate its impact; b) the ad acted as a ‘trigger’ – it reminded people of their habit (‘Yes, I could do with a smoke…’). Did you notice something under the slogan by the way? That’s right – sponsored by Philip Morris USA… 🙂

The Truth: What about the second ad now? The second ad does not speak to reason. Instead, it aims to evoke a more visceral reaction. ‘These so-and-sos, hiding like Saruman inside their tower, they make a profit by killing people!’ This approach clearly has a firm grasp on teenage psychology and exploits their predisposition to rebel against authority to the full.
Plus, evoking anger is much more effective in getting people to act (in this case by refraining from smoking) than other approaches (‘Make them mad – not sad’ Berger 2013 – p. 117). So what about effectiveness? Follow-up studies showed that teenagers exposed to this campaign were 66% less likely to smoke. Interestingly enough, big tobacco did not like this one bit; they took advantage of an ‘anti-vilification’ clause in a settlement they had reached with the state to have the ads pulled from the air… (case studies given in Heath & Heath 2008 – pp. 169-171).

So what can we learn from all this? The lesson here is obvious: emotion trumps reason any day. If you want to change the way people think about something, reasoning with them might work; but if you want to change their behaviour, appealing to their emotions is a much safer bet (Ferrier 2014 – p. 80). Pringle and Field (2012) made use of a huge commercials database and they found that emotional campaigns far outperformed ones which relied on logical arguments and persuasion. Indeed, they were nearly twice as effective (the figures being 31% compared to 16%).

Where does ethics come in? So you might say – ‘OK, what does all this have to do with ethics?’ I will be coming to that soon. One of the criticisms often levelled against marketers / advertisers  is that they try to achieve their aims through dishonest means.

There is clearly some truth in this, but let us have a closer look. Look at the picture. This is the ‘spectrum of influence’ (from Ferrier 2014 – p. 200). Obviously coercing people is wrong while educating them is fine. But what about ‘Manipulation’ and ‘Persuasion’? Well, you might say, the former is bad, the latter is good. Now as Ferrier again points out, according to the dictionary, persuasion is ‘To induce someone to do something through reasoning or argument’ (Oxford Dictionary 2013). But as we saw earlier, there is a problem with persuasion: study after study after study shows that very often it does not work.

Wiseman (2012 – p. 234) gives examples of three different campaigns (against smoking, drugs and unhealthy eating) which proved a total waste of money because they relied on appeals to reason. As comedian Henny Youngman once put it: “When I read about the evils of drinking, I gave up reading!!” (ibid, p. 227). The problem with this approach is that it is based on an outdated notion of how the human brain works.

We tend to assume two things: a) that the conscious part of the brain all there is and  b) that there is internal consistency between our thoughts and our actions. In fact, both of these assumptions are wrong. As T. Wilson puts it, the conscious part of our thoughts is not all there is and it’s not even ‘the tip of the iceberg’; it is a snowball on top of this iceberg! (Wilson 2002 – p. 6). And Kurzban (2011) has put forward the intriguing idea that our brain actually consists of lots of largely independent modules which, far from acting in unison, very often actively undermine each other in order to get us to do what they want (‘Should I stick to my diet or scoff that chocolate cake?’).

Now think back to ‘The Truth’ ad – did it use logic? Arguments? Figures? No. It simply triggered anger against the tobacco giants who continue to make a profit by selling a dangerous product, undermining the health of millions, saddling society with externalities and getting away with it by means of careful lobbying behind the scenes. Personally, I find it hard to label such an approach ‘unethical’.

Things are not what they seem:  OK, this is the ‘half’ lesson. Do you remember that coffin in the beginning? It could well be part of an anti-smoking campaign, couldn’t it? But ‘things are not what they seem’. It turns out that it was Adam’s father who had chosen this type of coffin, because he loved smoking so much! He clearly had a sense of humour. Before he died, he told his son: ‘Son, I don’t care what you say in the eulogy, but make sure I get cremated; I’d like to light up one last time’. Brilliant… 🙂

THE MORAL QUESTION Would you put your own job in jeopardy to highlight the needs of your students? Yes? Read the question again. Even…