Enacting language policies in Indonesia is no facile undertaking. The country’s remarkable language diversity complicates the effort of policymakers.There have been numerous policy developments since 1928 until present, yet no language policy appears coherent enough to regulate approximately 712 languages spoken by its citizens across more than 17,000 islands. 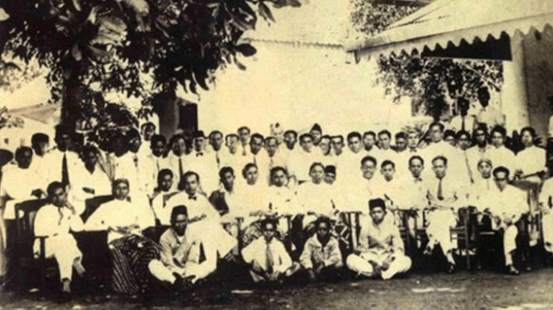 Early attempts to standardize the language use can be traced back as early as 90 years ago, in 1928, when a group of young nationalists gathered and pledged to use Bahasa Indonesia as a unifying language to fight against Dutch colonization. The 1928 Youth Pledge on the enforcement of Bahasa Indonesia was then proved to be a fruitful strategy as it successfully bridged the multiethnic and multicultural differences, making the endeavors to get independence possible. It took only 17 years after that for Indonesia to get the freedom from Dutch administration that had occupied the country for hundreds of years.

This was a period where the main orientation of language policies was to find ‘solutions’ for language ‘problems’. Unifying Indonesian people was ostensibly arduous if people did not even communicate with the same vernacular. Obliging the practice of a national language was therefore a realistic and practical solution for this formidable encounter with language varieties. It was perceived as a cost-effective approach to push the national development plan.

Over the succeeding decades after independence, under President Soekarno and his successor President Soeharto, language planning was seen as an essential element of national development efforts. The 1990 census data shows that 83 percent of the respondents claimed to at least have knowledge of Bahasa Indonesia, a double increase from that of 1971. In general, the status of Bahasa Indonesia grew astonishingly from a minority to a majority language. The late Professor Soenjono Dardjowidjojo, one of the most distinguished linguists in Indonesia, argues that the national language was successfully spread not only due to the responses from early young nationalists but also because of the ‘nourishment’ of the language after it was adopted as the national language.

In addition to enacting the official language, using globalization and the invention of the Internet as the backdrop, the government introduced English as the main foreign language, hoping that the spread of English could gradually assist the economic development. The Ministry of Education and Culture (MoEC) enacted Decree No. 060/U/1993 on the introduction of English in the elementary schools from grade 4 onwards. More than a decade later, the Ministry of National Education (MoNE) issued Decree No. 22/2006 which allowed elementary schools to freely teach English even earlier than grade 4 following demands of parents who believed in the urgency of early English teaching for improving their children’s proficiency.

The parents’ enthusiasm towards English and their disappointment with the teaching quality in public schools has encouraged the establishment of ‘international schools’ offering an educational system that uses English as a medium of Instruction. Parents who have more money are willing to invest in these schools because of their concerns on the poor quality of English teaching in Indonesia. English teaching quality in public schools is not comparable to that of the international schools mainly due to the unavailability of qualified English teachers and the lack of facilities and infrastructures.Therefore, parents do not want to send their children to these schools, fearing that their children will not be proficient enough in English to face globalization.

The English language is highly favored by parents predominantly due to the belief that proficiency in this language can open wider employment opportunities. Some higher education institutions require their students to prove they have passed a particular minimum score of TOEFL, or otherwise, they could not graduate. There is an increasing number of employers asking their potential employees to demonstrate their English proficiency proven with an English standardized test certificate, be it TOEFL or IELTS. There are still many instances where there is still belief in the pivotal role of English as a catalyst for economic development.

This belief in the importance of quality English education to boost economic development is backed by a study conducted by EF (English First). The newly-released 2017 English First – English Proficiency Index (EF-EPI) that studies more than one million test takers from 80 countries claims that ‘the better a country’s English, the more money its people make’. The 2017 EF-EPI categorizes Indonesians, unfortunately, into a low proficiency group (ranked 39th). As a comparison, its neighbors, Malaysia and the Philippines, are ranked 13th and 15th respectively, putting them into a very high proficiency category. Indonesians’ English proficiency is even left far behind Singaporeans’ that gets the 5th rank. This fact creates even more massive demands from parents in Indonesia to provide more spaces at English teaching in schools.

Indonesian policymakers, however, seem not accommodative to the pressure from parents. By contrast, there has been a tendency of perceiving English as a threat to national identity and local languages. In 2012, the 2013 curriculum stripped away the status of English as a compulsory subject in elementary schools. The primary contention is that children have to be taught Indonesia’s cultures and values including indigenous and local languages before they are exposed to foreign cultures and languages. The existence of English in elementary schools is seen as a threat to the acquisition of the local and indigenous languages. Some are even afraid of the possibility of language loss.

The issue about language loss in Indonesia is unfortunately true. Ethnologue, a web-based catalog of the world’s living languages, shows that of 712 languages in Indonesia, 260 are vigorous, 272 are in trouble, and 76 are dying. Michael E. Krauss, a renowned American linguist, predicts that a language that has 100,000 speakers or fewer is at risk. In that case, 90% of Indonesia’s living languages are therefore endangered. Two researchers, Maya Ravindranath from the University of New Hampshire and Abigail C. Cohn from Cornell University, further highlighted the importance of addressing language endangerment in Indonesia after they found that the number of speakers is not a sign whether a language is at risk or not. They conclude that even the Javanese language that has more than 80 million speakers is not susceptible to endangerment as shown by the shift away from the use of this language among younger people.This endangerment of local and indigenous languages is predominantly due to the failure in fostering the intergenerational transmission.

Debates on English status as a compulsory subject at schools

Seeing this risk of language loss, a question arises: is the policy of removing the status of English as a compulsory subject in elementary schools appropriate and effective as an attempt to save local languages from extinction? Or is it just slowing down the economical development of the country? To answer this question, we need to know the reasons behind the enactment of this policy.

There are at least two main reasons behind this policy. First, policymakers assume that current space for local language teaching is very limited. The removal of English in elementary schools will give more space for local language teaching. While it might be true that there will be more hours spent on learning local languages, it is still unclear if this will eventually increase students’ interest in learning local language and stop them from accessing early English teaching provided by private tutoring or other educational institutions. Furthermore, the advancement of technology has enabled children to get English materials which are just one click away. Thus, this policy might become ineffective to promote the local languages among younger speakers.

Second, policymakers may have considered children’s cognitive immaturity. There have been arguments advocating the prohibition of students from studying more than one language on the basis of the unreadiness of children to acquire foreign languages. There have been some studies as well that show the benefit of early multilinguals as compared to monolinguals. These contradictory results show that it is inconclusive whether early foreign language learning is beneficial for children or not. Therefore, enacting a language policy on the basis of cognitive immaturity is still groundless.

From my point of view, this policy on the removal of English in elementary schools might send the wrong messages to language learners and teachers. This policy indirectly puts English and local languages head-to-head. It rebuilds the boundaries between the two languages that have long been gradually demolished thanks to the globalization. Contesting languages is not a strategic policy because it discourages multilingual practices. Furthermore, this policy might not eventually increase the status of local languages anyway but instead, it might just strengthen the prestige of English. This is because eventually, English can only be accessed by the elites who can pay for expensive English private tutoring. Those who do not have much money will not easily get the same access.

So what is the best way to deal with this local language endangerment? First, government has to start creating more spaces for multilingual practices. Schools have to be able to let or encourage their students to switch from one language to another when communicating. Schools have to decrease the stigma that mixing the languages is a bad practice of using the language. Instead, schools have to start seeing this phenomenon as a sign that their students’ languages are developing. Second, policymakers have to support, facilitate, and encourage parents to teach and provide examples of multilingual practices to their children with the emphasis on providing equal exposure to local, national and foreign languages. Families are the smallest but most important institutions that can bring significant influences on the younger speakers’ belief and attitude towards local, national, and foreign languages.

To sum up, Indonesia has undergone three phases of language policymaking. The first phase is the enactment of national language to address the ‘problem’ of language diversity during the colonial era. The second phase is the introduction of English to boost the economic development. The third phase is the awareness of the importance of saving local and indigenous languages from extinction due to the dominance of Bahasa Indonesia and English.

Rasman was an English language instructor at the Centre for Language Development and Adjunct Instructor at the English Education Department, Yogyakarta State University, Indonesia, (2017-2018). He holds a master degree in TEFL (Teaching English as a Foreign Language) from the School of Education, University of Birmingham, UK.