Trunk also means a wooden crate. A wooden crate is neither long nor slim but it is wooden and sturdy, just like a tree trunk. The resemblance is obvious especially when we stand the crate on its side.

But that leaves us with trunk – wooden crate and trunk – elephant’s nose, which don’t seem remotely similar. A wooden crate is wooden and rather thickset and an elephant’s trunk is animal material, long and slim. What do these two trunks really have in common? Why are they both named trunk? Isn’t that illogical?

Let us add another trunk – a car boot! A car boot is similar to a wooden crate. Both have a lid that opens up, we can store things inside, and they are roughly the same size. 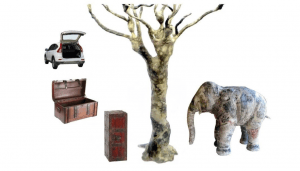 It is the associative mind’s job to spot a significant resemblance, which is why there is no common denominator. In fact, we have not used logic at all. The associative mind is a subjective tool. It does not look for impersonal, objective rules. It leads our attention to such circumstances and finds such resemblances as are practical and useful to our own selves. Its task is to be tailored to our own specific, practical needs.

Resemblances found by the associative mind are practical and subjective, not abstract and logical.

Now we can easily understand why children learn languages so easily. At an early age the associative mind is very prominent and constantly compels children to do similar activities, make similar faces and use similar sentences in similar situations. It constantly looks for practical resemblances everywhere. Their logical thinking is so far not fully developed, and yet this does not seem to prevent them from performing similar tasks. On the contrary, it is a help rather than a hindrance.

“But don’t we use logic to name various chairs as chair?”

No, we don’t. The associative mind makes us name various chairs as chair, because they are similar to some other chair we have seen. Since the similarity we find is practical not logical, we may call a chair an improvised box, tram steps we have recently sat upon, or even the top of a washing machine! But they definitely do not fit into the definition of a chair. These objects have nothing in common, unless it is “anything that anyone is sitting on or can theoretically sit on.”

The same will be true for grammar phrases. We may say will have happened in situations where we know for a fact that something has happened already, or when something cannot have happened yet, if circumstances call for it. Though, we may try to be very tolerant and turn a blind eye, we cannot pretend that these two fit into the definition of an event that has probably happened. Logic does not allow such deviations from a formal definition. Nonetheless, such messages will be perfectly intelligible to the listeners, for they too, use the associative mind to spot a resemblance, bearing in mind the significant circumstances of the situation.

While speaking, we are not making use of a logical system. Instead, our associative mind finds close resemblances and remote resemblances, bearing in mind the significant circumstances of the situation, and creates practical analogies.

Julia, the 2-year-old child we’ve met in the previous chapter, likes to spill a block set over her head and say Julia has taken a shower1. For Julia, playing is a significant circumstance so she is reminded of something playful and funny. But for Grandma quite a different circumstance is significant and she has spotted a different resemblance: Julia has made a mess of the blocks. How then can we communicate? We can, for we are all humans and we are similar enough, so we can understand each other’s analogies.

When Julia says Julia has taken a shower, we can see what she means, we can see how spilling the blocks over her head resembles running water, for we have a similar experience ourselves and Julia can communicate with us. Also, when Grandma says we will clear up the mess, and then we will take the doll, again Julia can understand that the block-shower also means a mess, for it resembles other messes she has made whilst playing, and Grandma can communicate with her.

A cat, on the other hand, can make neither head nor tail of it and must feel like a cat at a tennis match! Cats are not the same as humans, they do not have similar experiences, and cannot understand human analogies, either spoken or actual.

We are now going to see how all of this applies to so-called grammar. To have a good look at the surrounding context as well, we will take a sentence from a well-known story, The Hobbit:

Thorin may compose will have read in one of these ways:

The associative mind brings Thorin a concrete model from his memory, such as will have killed, which is likely enough, for this sentence has indeed been pronounced earlier in the same scene: “Gandalf will have killed hundreds of dragons in his time.”3

The memory is fresh, and the model can easily spring to his mind. From will have killed Thorin creates a similar sentence will have read.

Thorin may have previously come across a model such as will have stolen. The situation shook Thorin’s emotions so much that the model left a rather deeper imprint in his contextual memory compared to commonplace models. That is likely enough for getting robbed seldom is a matter of small moment. Such an experience as this will vigorously spring to mind in a similar situation.

Thorin is now reflecting on the precarious situation the dwarves are in. More and more “ravens have been seen flying back to the mountain, as it was foretold. When the birds of yore return to Erebor, the reign of the beast will end.”

Other groups may try to reach the mountain ahead of them and steal their treasure and their homeland. These significant circumstances make Thorin recall will have stolen, and he creates a similar sentence to will have stolen – which is, will have read.

A recent encounter or emotional upheaval can easily be replaced by a repetition rhythm of daily or life routines, and thanks to them the associative mind will get inspired and find a similar model just as readily.

“But obviously,” you may be thinking, “one of the ways to put the sentence together is to use some logic. The rule is event that has possibly happened and from will have seen will have eaten will have stolen we can work out a formula will have + past participle, as grammar books helpfully instruct us. Surely, Thorin can see that.”

The Hobbit: An Unexpected Journey, 2012

Actually, he cannot. The memory of will have stolen has inspired Thorin to create will have read, because such circumstance is very significant in his present situation, while will have eaten left him completely cold and did not so much as occur to him.

One will have does not equal another will have. That’s mathematics.

Neither could the inspiration be triggered by reading isolated phrases such as will have seen, will have eaten, or will have stolen placed in a grammar table. The inspiration was sparked by Thorin’s personal reflection about the story, the circumstances, and their significance in his life. All the same, there is one more way to compose the sentence:
◊ Thorin has many times come across models such as will have seen, will have taken in many different situations. He interpreted them in the same way as all other sentences, by paying attention to the surrounding story; he did not apply any amount of abstract thinking.

As the memories are linked to diverse and plentiful circumstances where Thorin came across them, the associative mind can easily get inspired, and one way or another find a resemblance with his present situation, the moment he thinks of warning the dwarves what may have happened or what has surely happened.

This implies some very important consequences for our methods of learning. While in mathematics, we learn a handful of formulas and then make millions of applications easily and correctly, the same cannot be said for languages. In fact, rather the opposite is the case. We need to collect a truly vast repertoire from eventful stories if we want to achieve fluency and proficiency in the various daily situations with their countless significant circumstances. Native speakers, too, have collected a vast repertoire in this same way, and that is why their level of proficiency is so much higher compared to students who are trying to learn the language from grammar tables and grammar rules.

Looking for a common denominator or a formula is a typical approach grown-ups take when trying to simplify their work. Why spotlight dozens of will have stolen, will have taken, have read already, and countless significant circumstances when we can use our inductive skills and find a formula, then use our deductive skills to apply the formula in new situations? We can save time! This is why I said in the Introduction that we start off optimistically with a bunch of short-cuts up our sleeve and end up with less than a conversational level and a firm belief in the common myths such as “one must start as a child,” “one must move to that country,” etc. If we have not even done what the native speakers have done, how can we claim that only children can learn languages? Let us do the same thing first, and then we may compare the results.

It’s because have red is well stored in his contextual memory as a single string, meaning have already read. Have red is also deep in his mechanical memory, for the two words notoriously come together. His associative mind will not create have reed since it will be vigorously reminded of have red, and Thorin would feel compelled to correct himself if he said something else. Unfortunately, the same cannot be said for students of foreign languages who drill-memorize reed – red – red (present – past – perfect) in a single string. The more they study, the more mistakes they make. We will expand on lamentable teaching methods shortly.

It is pointless to learn languages using grammar rules. Looking for a common denominator or a formula is a mathematical operation that makes no sense in languages.

Alena studied at French bilingual high school in Bratislava (Slovakia), holds a degree in International and Diplomatic Studies (University of Economics, Prague), and three C2 certificates in foreign languages (English, French, and Spanish language). She is also fluent in the Czech language which is similar to her native language, Slovak. She has been teaching the English language for 6 years in Prague, and in 2020 self-published a book How to Master a Foreign Language: How Language Intelligence Works, on Amazon.

Five years ago, I was teaching IELTS Writing for the British Council in Vietnam. I started to put my lessons online so that students…