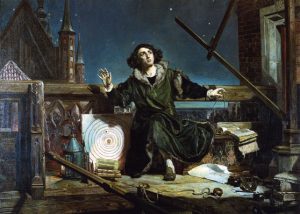 The Copernican Principle – named after the 16th-century Polish astronomer Nicolaus Copernicus – says that there are no ‘special’ observers. In other words, we can explain how the universe works without assuming that the Earth, or anywhere else, occupies a central or special position.

I’m an English teacher (I’ve taught in Argentina, the Congo, Indonesia, Japan, Mexico, New Zealand, Spain, Turkey and the UK) but my degree is in astrophysics. Students occasionally ask me if there is any connection between the two fields, and I think there is: the Copernican Principle can be applied to the English language.

Five hundred years ago, English was spoken by about three million people, and the centre of the English-speaking universe was London. Today, the language is spoken by two billion people – and nobody occupies a central or special position.

In many ways, English has become more like a tool than a language. Richard Pooley, a cross-cultural communication consultant, tells the story of how Korean Air decided to award a contract for flight simulators to a French company instead of a British one.

How can we help students to thrive in this Copernican universe? A lot of the listening material available to English teachers and students tends to feature native speakers. The aim of this “Copernicus” column, here in EFL Magazine, is to share great examples of non-native speakers and give students more exposure to what English sounds like in different parts of the world.

We would love to hear your suggestions: do you have any favourite examples of non-native speakers using English that students might find interesting, helpful or inspiring?

Here’s one of mine: it’s a two-and-a-half-minute presentation to the International Olympic Committee (IOC) by Yuki Ota, a Japanese fencer.

The IOC was meeting 18 months ago in Buenos Aires to choose the host city for the 2020 Olympics. Ota, who won a silver medal at the 2008 and 2012 Games, was part of the team representing Tokyo.

“I’m not very good at English, but I needed to make a powerful and successful presentation,” he remembers. “So I practised very hard to make the sentences into my own words, and kept saying to myself, practice makes perfect.”

There is a transcript here (on page 15):
http://www.japanportal.jp/T2020_Final%20Presentation%20Script.pdf

In 2017, I co-wrote an article, Quizlet – Create Engaging Vocabulary Study Sets, about the basics of using Quizlet to assist students with vocabulary…