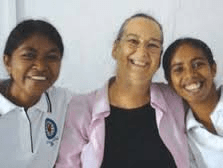 Here I am with two of my students, both of whom are now teaching in primary schools.

I am a self-funded volunteer who lives on the island of East Timor, officially known as the Democratic Republic of Timor-Leste. To give you a clearer picture of where we are in the world, I can tell you that our neighbour to the south is Australia.

Colonised by the Portuguese in the 16th century, Portuguese is one of the two official languages; the other is Tetum, which is the most spoken of the two. There are also19 different dialects, which are spoken rather than written. I found it difficult to learn Tetum when I first arrived but now I speak it sufficiently to sometimes forget my English!

Being a Caucasian in an Asian country was a huge cultural change. I am called ‘malae” – foreigner – when I go out, and though I feel very much at home here, I know I will always be an outsider. I go back to Australia once a year to meet with family and friends and to have medical checks etc. I also buy as many teaching resources as I can fit in my bags!

In the earlier part of my career, I taught in both primary and secondary schools. But later, as a teacher at the Australian Catholic University in Australia, I was seconded to East Timor to help the Marist Brothers set up the first teacher training college. So for the past 15 years, I have worked at the Instituto Católico para Formação de Professores (Catholic Teachers College) in Baucau, Timor-Leste, as a teacher trainer, preparing students for teachers for elementary and middle schools. This has involved writing the curriculum, preparing teachers to teach using child- centred learning strategies, setting up administration systems etc.

In 2012 I handed over my position to a Timorese lecturer and now spend my time ensuring quality to international standards for both lecturing staff and students. As part of my work, I also supervise the teaching of English to a small group of students – lecture content as well as teacher support. It was through this that I found EFL Magazine on the Internet. The resources have been wonderful! Being able to teach some classes has meant that I am still able to be involved in teaching.

East Timor is a relatively poor country with 58% of the population living in poverty. Underemployment and unemployment of young people is a real issue and many young people leave their home and families to find work overseas. The college offers scholarships to support students in need, so the majority of students receive financial support where fees are paid and a small monthly allowance is given. 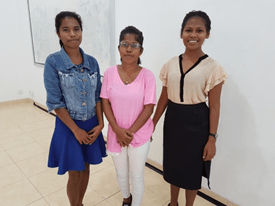 Three of our students who received a scholarship from a school in Australia.

We have more female students than males – about 70% young women. Most are single but if they pass the entrance exam and interview, women with families are very welcome. Many of our mature age women were married young so missed out on further education. 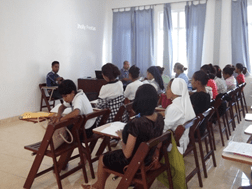 A typical class at ICFP

Timor first became independent from Portugal in 1975 but after only 7 days it was taken over by Indonesia, becoming its 27th province.

For the next 25 years, Indonesian was the national language and the use of Portuguese and Tetum was banned. Today the Timorese use an assortment of languages – mother tongue, Tetum, Portuguese and Indonesian. In addition, English is taught in high schools. At the teachers’ college, we use Tetum and Portuguese for teaching our students and have a specialist group for future English teachers who will teach in the high schools of Timor.

When I first went to Timor there was no electricity and little water from the town. Students studied by candlelight and walked a long way to get water. Today there is electricity with few outages and we get water for our tanks 3 times a week – luxury! No excuses for not completing assessments anymore.

Our graduates mainly teach in government or Catholic schools, though a few find their way into NGOs where salaries are higher than for school teachers who receive between $120 to $200 a month. The course that is offered at the college is a 3 year diploma but last year we started a 4th year to give a degree equivalent of a Bachelor of Education that is conferred in other countries.

Timor is hot all year round very humid between October and December when the rains start. Then it gets even hotter.

I would say that Timor is not the place to come and work as an EFL teacher because of the poor economic conditions. In addition, visitors can only get a three-month visa or if they want to stay longer and try and work here they have to be sponsored by a business or NGO. Life is also expensive here.

For me, working in Timor-Leste has been such a rewarding journey – since the Institute began with 53 students in 2003 there are now more than 550 graduates working in schools throughout the country.

They are teaching in pre-primary, primary, pre-secondary and some in secondary schools – in fact, wherever teachers are needed!

Margaret Beck is a self-funding educational consultant, working in East Timor. She is Australian and worked for an Australian University from where she was seconded to East Timor to help set up a teacher training college.

By Natalie S. Johnson Many ESL teachers have classroom experience in countries where learners all speak the same first language or L1. Some may…