“My family had to escape from our country because of it.” My EAP (English for Academic Purposes) class had ‘cubed’ the lesson topic – describing, comparing, analysing, arguing, telling a relevant story, and so forth. Now, learners were sharing with the class what they had written. It was a sensitive topic to talk about, but things were going okay. Suddenly, near the end of the group discussion, one of the quieter students began sharing her family’s experience with this topic. Her family had been forced to leave their homeland and emigrate to a neighboring country. Just like that, the class atmosphere changed. Suddenly, this was a living topic, an important class hour, because a classmate had told her story and made herself vulnerable. She had provided a window into the real-world consequences of our reading topic. This sort of human connection is one of several benefits that the cubing method of brainstorming offers a learning community of teacher and students.

Cubing is an activity that involves briefly brainstorming about a topic from multiple perspectives. It promotes critical thinking about a topic, which is particularly useful as preparation for speaking and writing. In its adjusted form, it can also promote creative, artistic thinking. When Gregory and Elizabeth Cowan published it for the first time, they described it this way: “You are not hunting for something to say from each perspective; you are taking a quick run into your mind for whatever presents itself on that angle, and the quickness of the run is important. It is the quick switch that makes the CUBING work.” (1980, 21, emphasis original)

How does cubing work?

Each learner gets a paper cube (printable cube). On each side of the cube is a word: describe, compare, associate, analyse, apply, or argue. Learners roll their cubes and write for a minute or two from the perspective that is shown on the cube. For example, they might describe ‘language learning’ or  argue for or against ‘the death penalty.’ Then, after about a minute, the teacher tells them to stop (even in the middle of a sentence!) and rolls the cube again. Now, students might compare language learning to another activity or analyse the death penalty. Continuing, the writers think about their topic from each of the other 4 angles. This can all be done in about 10 minutes. It creates a quick and effective foundation for writing or discussing any topic. Most of the thinkers’ ideas won’t be completed, but they will be started, and they will be ready for development. Besides having the ideas, writing students will also have a good bit of material already written.

Shortly after first being published, cubing was presented to the TESOL community (Hughey, Wormuth, Hartfield, Jacobs 1983). While it has been mentioned since then (Hyland 2003, Nation 2009, etc.), cubing does not seem to be common in EAL classrooms. One reason might be that cubing, in its original form, was often too complex for a new language user. Cubing never seems to have been developed beyond the original, very useful concept. Apparently it also wasn’t simplified for new language users. For example, words like ‘associate,’ ‘analyse,’ or ‘apply’ may distract the thinker; but words like ‘connect,’ ‘think about its parts,’ or ‘use’ should be familiar even for A1-level language users.

How can we adjust cubing?

I realised that the original cubing key words were not level-appropriate when my class spent a large part of their 1-2 minutes trying to figure out what the key words meant. So, I changed the words and added some simple, clarifying questions. Then, I began making other changes. I added more perspectives to think or write from. For instance, feelings can be difficult to talk about, especially in an additional language, so I added ‘reaction’. To increase creative expression, I included ‘draw a picture’ or ‘songs or poems’ as categories. Eventually, I even added certain skills, such as summarising the topic in one sentence. As well, to activate vocabulary, there’s space and time for synonyms or relevant collocations. In each case, 1-2 minutes allows the learner to generate some ideas that will support the writing or speaking later on. (Here’s a sample worksheet to examine.) 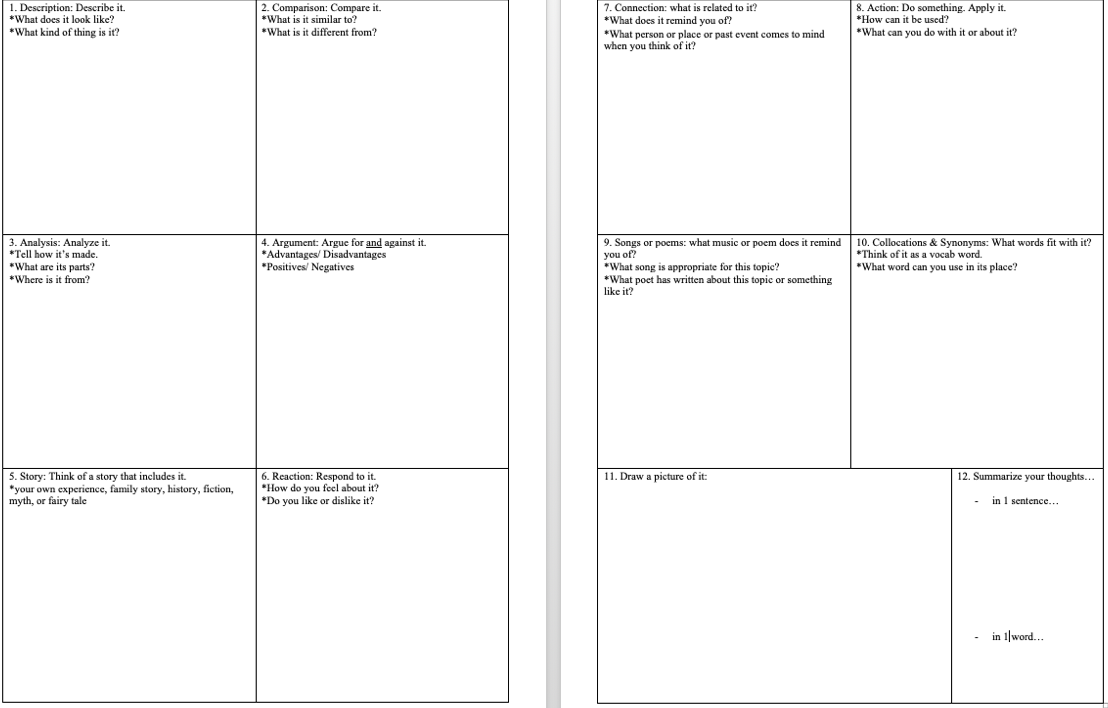 As you can see, with a little thought, one can easily add more perspectives or customise the ‘cube’ for a particular topic. For instance, for some topics, Maslow’s hierarchy of needs could be simplified as the guide (physical parts, dangers, connections among people, successes, and dreams). Or, Gardener’s theory of multiple intelligences, Bloom’s taxonomy (which is somewhat similar to the Cowans’ original cube), or some other framework could be used to create a new set of perspectives as long as the keywords were level-appropriate.

Along with these modifications, I changed the format. A physical paper cube is a great tool for a classroom, but they are quite time consuming to make, and they get crushed very easily. So, I made both printable worksheet and presentation versions, so that I could use it more conveniently. This way cubing is always available when I need it.

Students, like the rest of us, often find writing difficult, and most don’t love brainstorming of any kind. In fact, they often don’t love cubing either. However, most of them will finish a cubing activity with far more words written down than they would after other, more traditional brainstorming activities. Thus, they will be more prepared for their main writing or speaking task.

For writers, cubing is more like prep-writing than pre-writing. Peter Elbow comments on the general problem of starting to write, saying, “Writing a lot at the beginning is also important because that’s when you are least warmed up and most anxious. Anxiety keeps you from writing.” (1973) Yet after 10-12 minutes of cubing, many students will have half of a page or more of handwritten notes, often in full sentences. The notes will still be disorganised and will have grammatical errors, but the students will be surprisingly prepared to begin organised writing. “Meaningful connections are not always arrived at easily, and the stretching students do in applying the cubing methods to their topics may yield remarkable and profound insights.” (Bahls 2012) In summary, cubing can be a tremendously beneficial activity to increase both critical and creative thought in the classroom.

Tomlinson, Carol A. 2001. How to Differentiate Instruction in Mixed-ability Classrooms.

Author Profile: Matt Champlin teaches English at 29 Mayis University in Istanbul, Turkey. Much of his teaching, and therefore his thinking about teaching and English, is focused on academic writing. Exploring the possibilities of the written word with students is one of his favorite aspects of being in 'learning communities'. Matt completed his masters in TESOL at SIT Graduate Institute; his thesis was titled "An Academic Writing Curriculum and Materials for A1-B2-Level Learners in a Turkish University’s English Language Preparatory Program."

Mobile technology is an almost inescapable aspect of our contemporary culture. It seems that with very few exceptions, most aspects of our lives can…