Evidence in education is something that is being discussed more and more often in talks, blogs and articles, so it seems like a good time to throw my thoughts into the mix. I think that it’s important at this time, as it seems to me that EFL hasn’t had a particularly strong relationship with research up to this point, especially regarding how the practitioners (teachers) view the work of the researchers.

Generally speaking, I think there are two types of people when it comes to evidence. The first are the people who think that the properly carried out studies are a necessary path in order to progress. The second group aren’t worried about such things, they prefer things like ‘gut instinct’, what they see in front of their eyes, and anecdotes. It seems that there is a lot of the latter in ELT. These two different approaches can be broadly compared to people’s view about science, summed up in this chart: 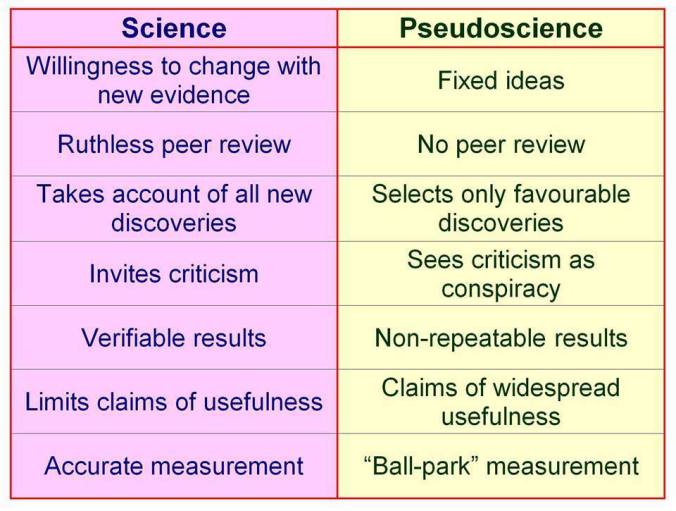 But when it comes to education, specifically language education, it can be a bit more difficult as we don’t have that basic set of rules that tell us exactly how to teach a language. Context is such a pivotal part of this discussion; the age, social status, physical and emotional health, academic background, family background, and personal motivation of both the teacher and the learners, as well as the physical environment where the learning takes place, the time of day when the lessons occur and the expectations of the institution where they happen will all have an affect on the final outcome – the ability of your students in English. These factors combine to make my classes not just different from yours but different from each other and subsequently it seems almost pointless to think that we can create a complete, unifying theory of language learning.

Everything is not as you think it is

In the long run, that may be the case but I would argue that rational, evidence based approach is still vital if we want to move forward towards a better understanding of what we do in the classroom. I think the mistake that the second group of people, the ‘gut instinct’ types make is that they overestimate humanity’s ability to understand what we see in front of us. There are countless examples in psychology of ways that we are deceived by our brains into perceiving things as we wish to see them, not as they really are. Human beings are very unreliable witnesses, especially when we have a stake in the outcome. This is evident in how people react to the idea that their belief has been proved to be wrong, or is at least unproven.

A few months ago, I read this comment, which was made in response to a criticism of multiple intelligences and neurolinguistic programming:

Although I have yet to come across any scientific proof of either Gardner’s multiple intelligences or NLP’s VAK styles, anyone who has ever taught a group of teens cannot deny their existence.

This is the kind of thinking that gets in the way of progress in our field. The first issue is that the speaker expects to “come across” evidence and this is unlikely, as it rarely lands in our lap. If they have a genuine interest in checking the data, they will have to go out and find it (which I concede is not always easy). The second issue is that the speaker accepts with absolute certainty the relationship between what she does in the classroom and with her perceived end result. She is certain that one leads to the other, but as I said above, the classroom is a complicated place and the student is a complicated individual. If only the relationship between what we do and the students learning was as simple and direct as she suggests. As progressive individuals, interested in the development of our field, we need to accept, with humility, that we are all flawed witnesses and poor judges of things that we are invested in. It’s a weakness we all share, including the more Spock-like among us. Accepting our human flaws and knowing that well-conducted, extensive research is required as a part of the process of understanding what we do is only a threat to what you believe in if you have chosen to make it a fundamental part of your teaching identity. I’ll be the first to admit that I have beliefs about my teaching that are completely evidence free, but what it is even more important to me is that if you can disprove what I think with well conducted research, I will happily change my mind in a heartbeat. It’s what rational thinkers and good scientists do, and I aspire to be like them.

What will it take for me to change my mind?

An effective question to ask yourself is “what will it take for me to change my mind?” If the answer is “nothing”, then you need to be aware that this is a path that can only lead to the shutting down of any constructive dialogue and an inability to progress, possibly to the detriment of your students. And I’m certain you don’t want that.

I’d love to know what you think, so please enter your comments in the box below.

Originally from Brighton, UK, James has taught English as a foreign language to adults and teenagers in Brazil, South Korea, Belgium and Costa Rica. He now works for Cultura Inglesa in Brasília, Brazil. He is a former President and a co-founder of BELTA, the Belgian English Language Teachers Association. James is also a very active member of the online ELT community, and you can also find him moderating #ELTchat, a weekly discussion on Twitter with teachers from around the world, producing the TEFL Commute podcast, mentoring teachers for iTDi, blogging and presenting at conferences, online and offline.

General-View (eflmagazine.com) indicate a candidate’s competency in the contexts in which they need to use the language. Nevertheless, general proficiency is reflected more or…