“That will never happen, Mr. Panell.” 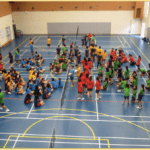 We had been discussing the year 2047, the date for Hong Kong to be “fully integrated” into mainland China. My Year 8 students, here at an international school in the New Territories, just south of the border with the People’s Republic, are insistent that this integration will never take place.

Class members become quite heated in their objections to assimilation. “There are too many of us to control.” “We’re too far away from Beijing.” “Hong Kong is too important to the economy.”

It is likely that their parents, before 1997, said the same thing about Hong Kong becoming part of China’s “One Country, Two Systems”. While the worst fears before that handover have not been realized, there are ominous signs. During the Umbrella Movement of 2014, for example, the government of China made it clear that it was willing to intervene to see that protests did not become common place. Again in 2016, the Chairman of the National People’s Congress in Beijing issued a ruling that removed elected officials from office—in some cases quite literally and through the use of force.

Of more immediate concern to my students, however, is the way in which preparations for integration into Mainland China have changed the words that young people are allowed to use. For one thing, it is illegal here in Hong Kong to discuss the independence movement in classes. After all Joshua Wong, one of the leaders of the Umbrella Movement who was jailed in the aftermath of that protest, was only 18 years old at the time when he helped to spark the occupation of Hong Kong’s Civic Square. Other leaders of that movement were also young, so discussions by teenagers here are viewed with suspicion as a result.

More than that, the bulk of my students—as with the majority of Hong Kong residents generally—speak Cantonese. By contrast, in mainland China, Mandarin (Putonghua) is the dominant language. Yet according to the EDB (Education Bureau), 72% of primary schools and 37% of secondary schools used Mandarin to teach the “Chinese language” in Hong Kong in the school year 2015-16 (as reported in the Hong Kong Free Press, April 9, 2017). The language these children have spoken since birth, the language they use to communicate with their friends and family members, is losing ground as an “official” language.

Even the international school where I work, despite lax enforcement of the policy, officially says our students are allowed only to speak Mandarin or English. Cantonese is forbidden.

What do you do when the authority figures in your life tell you that you can’t use the language that you have spoken your whole life? If you are a teenager in Hong Kong, the answer is to become part of creating a new language. The young people have resorted to speaking in a digital tongue.

“Locky ALWAYS speaks English at home. I can’t even understand him!”

Locky’s first language is Cantonese. He sometimes struggles with higher-level vocabulary words in my English classes, so I had suggested to his mom, by way of an interpreter, that Locky should practice more in English conversations outside of class. I was surprised when his mom insisted that Locky was already speaking English conversationally “all of the time”.

As I considered what she had said, I realized that Locky is fluent in a language that is equally alien to both his parents and to me. That’s why neither one of us recognized his words.

Locky—as with many of his classmates—is articulate in the emerging global digital English. Kids here in Hong Kong debate PUBG variations, scorn click-bait, worry about being triggered, and want to create memes that are lit. The phrases they use here are the same ones that students used in my classes back in America.

These children are part of a global generation that is fluent in a new technical variation of English. Whether we call it Diglish or Englital, it is moving around our world as quickly as the latest waves of technology. 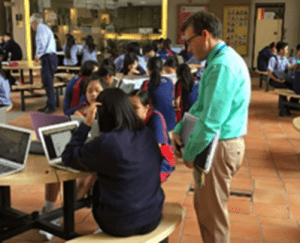 English is the language of technology. There are many reasons for this. Most research findings must be translated into English in order to be published in scientific or technology journals. Additionally, the world’s most popular programming languages use English key words.

The latest technological innovations often use English as the default or primary interface. This is as true for Google as it is for Twitter, Facebook, and other forms of social media which our young people have come to rely upon for communication.

Right here in Hong Kong, where social media was used to organize the Umbrella Movement of 2014, protestors were photographed carrying signs that read “POP VOTE” and “Because I Love  HK”. A widely-circulated picture featured an umbrella emblazoned with the words, “We don’t need any tear gas we’re crying already”. All of this came with #s aplenty.

Digital English is also transmitted through YouTube. If you want your video to reach the widest audience, you had better use this latest technical variation of English.

At my school here in Hong Kong one of my students, Jade, despite her shy appearance, is an aspiring YouTube personality. Because of her in-class demeanor it took me by surprise earlier this year, during a discussion, when Jade off-handedly mentioned that her YouTube channel has over 4,000 followers.

It turns out, Jade has more “students” in her virtual classes than I have in my bricks and mortar school room. Kids flock to her videos by choice because she speaks in the latest digital English. Jade specializes in diverse “Do It Yourself” topics, that range from making decorative Chinese lanterns to knowing how to tell the difference between a blog and a vlog. Jade’s goal is for her channel to “go viral”.

Jade is also a “resister” to the Mandarin courses that are required in school. Despite the fact that she is normally a diligent student, she—along with a sizeable group of her classmates—seems to be intentionally underperforming when it comes to speaking in Putonghua. During a recent “Chinese” Poetry

Competition, for example, Jade was one of several students who sat in the back of the auditorium whispering and giggling, completely ignoring what was happening on the stage. When I asked why she wasn’t participating in the competition, Jade derisively answered, “I don’t speak that language. I don’t like that language.”

Yet Jade has no problem in speaking digital English. Inspired by her example, I assigned the class to create YouTube videos on any topic in my English class. Jade’s final production featured technical flourishes like floating text and thought bubbles. Her classmates “oohed” and “aahed” throughout her presentation. Her skills in the use of this digital English easily distinguished her.

Jade has figured out how to amplify her digital voice so it will reach a larger audience than that of her immediate friends and family members. She is attempting to become part of a select group of YouTubers who capture global audiences.

The most popular of this group of digital speakers talk in technology almost exclusively. Some of the most-watched segments simply feature a young person playing a popular electronic game; they talk while the screen capture video rolls. Others feature a “host” informing the audience of unusual facts; frequently these facts are comparisons of the “specs” of the latest technology.

Our young people are picking up new vocabulary words through technology at a pace that would make any classroom teacher jealous. Each time they use social media, play games, or code apps of their own, children increase their confidence in the use of this language that is now spoken globally.

Locky has already assimilated this digital English into his daily life. He has escaped the choice between the
“official” Mandarin and “informal” Cantonese language that he is asked to decide between on a daily basis as a teenager here in Hong Kong.

Technology has given Locky the freedom to speak. As with people his age worldwide, he is using this language to subvert the rules that hamper his life.

It is time for our schools to face up to this reality that Locky already understands. If we aren’t offering young people in our classes the chance to express themselves in this new digital language, how relevant or necessary are we? The things our kids have to say, that are most meaningful to them, are spoken in a digital voice.

Yet every school I’ve worked at over my career has waged war against the use of electronics. We continuously fight against the way our young people spend their time looking at screens; we deride them for playing digital games and communicating on social media. We tell students to put their phones away in class, even during “free” time.

Language is how we create identity. My students here in Hong Kong are forging a digital identity that circumvents the limits of what they are officially allowed to be. Isn’t the role of the school to support this emerging identity?

I don’t know what the future holds for these children. Will China ultimately deny Hong Kong any form of autonomy? Will the Umbrella Movement be a forgotten moment in time, or the beginning of something larger?
In this moment, these children are participating in a global digital discussion. I want these kids to have their say.

What do you say?

Do you give your students the chance to speak in the language of their choice while they learn English in your classes?

Chris Panell currently serves as the English Subject Lead for the flexible middle school model at a well-regarded international school in Hong Kong, in addition to teaching their web and app design courses. He has been published in numerous education journals, including techdirections, Teachers of Vision, and The Voice of the National Writing Project. He has 18 years of experience in teaching both technology and English courses to students from 11 years of age to those in college, and has been teaching primarily English as an Additional Language learners for the past two years.

Reflections on My Experience of the CELTA Course Why did I complete a CELTA course? Having decided to stop working as an assistant head…