Can you speak mathematics?

Some linguists claim that mathematics has the design features of a language. Equations are the equivalent of sentences, +, =, ÷ etc. are verbs and adjectives, numbers are nouns and variables like x & y are pronouns. Mathematicians can use complex equations to discuss the workings of the universe without knowing each other’s languages and the rest of us can negotiate with taxi drivers and shopkeepers in foreign cities using basic arithmetic on a scrap of paper.

It may be true that written maths is a language, but to speak it you need a hybrid language – a combination of maths terminology and a natural language. We all learn this hybrid at school but to remind yourself of how it sounds try this example of a maths sentence. In English, speak this equation aloud;

A native speaker of English will say, with a few minor variations; “x squared plus the cube root of thirty-seven equals five y over nine.” No great problem there. A non-native speaker, on the other hand, who learnt maths in his or her own language, will understand the equation but find the task of speaking it in English quite hard – maybe even impossible.

Children everywhere study mathematics and it is an integral part of many areas of work and study. The vocabulary and syntax used to express algebra, arithmetic, statistics, mechanics and geometry could not be more relevant to language teaching. But how often is this language taught?

If you are an EFL teacher, have you ever illustrated the passive voice with a sentence like “x is substituted by a value of minus three” or thrown in a conditional example such as: “if x is even and y is odd, then x + y is odd”? Probably not. Maybe it’s because such sentences are too dull, or maybe, as Dennis the Menace says, “There are three types of people; those who can do maths and those who can’t.” Because you think you can’t do maths, you therefore don’t do its language.

Maths; be afraid, be very afraid

Mathematics is the only school subject I know with its own dedicated mental disorder. People suffer from arithmophobia long after they have consigned their Helix Oxford maths set to the bin and if they have to make a calculation in public their brains freeze. They fight back by criticising mathematics for being abstract and refuting the claim that maths has use in real life. They sneer, “When did I ever use calculus? When did I ever need to find x?” Then they deal it the final humiliation and turn being no good at it into a boast.

Is it true that the importance of mathematics in schools is disproportionate to its importance in every-day life? Well, it’s true that most of the mathematics we learn in the classroom stays in the classroom, but the actual doing of mathematics, which is basically problem solving and puzzling, plays an essential role in acquiring the cognitive skills we need to function in a world of algorithms, automation and forward planning. Apart from the obvious money management skills, learning maths develops the ability to form concepts. It strengthens long and short term memory and is intimately connected to deductive reasoning and language development.

Although mathematics uses a vocabulary of universally recognized symbols mathematical problem solving nonetheless relies heavily on language. Research shows that when ESL students do maths tests in English, they perform worse than if they do the same tests in their native language. This indicates that it may not always be the procedures and concepts of mathematics that students find difficult but the instructions on test papers.

One reason for confusion is that maths has multiple ways of saying the same thing. For example maths problems tell us to find, solve, calculate and determine, all of which mean “work out”. At a basic arithmetic level one reads: 3 + 4 = 7, but when the sum is spoken you will hear any of the following; three add four equals seven, three and four is seven, expand three by four to make seven, three plus four totals seven, raise three by four to get seven and the sum of three and four is seven.

Maths has a big lexicon. It uses words which you meet outside the maths classroom such as: percentage, vector, polygon, gradient, common denominator and ratio. But there are also maths-specific words such as: non-colinearity, integer, (to) factorise, (to) bisect, (to) subtend and (to) raise to the power of … which most of us will never come across in any context other than maths books and maths lessons (is that a sigh of relief I hear?)

Maths also uses common English words in unique ways. For example, power, exponent and index are about how many times to multiply a number by itself. To expand is to take brackets out as well as to convert centimetres into metres. An expression is a sum, vulgar describes a fraction which is not a decimal, you round up numbers (rather than sheep), you carry and borrow tens and you simplify an improper fraction by cancelling the top and bottom.

The grammar of maths

You might expect that something as rational as mathematics would at least have a consistent grammar. No such luck. As with other languages, there are rules but many exceptions. Take the use of brackets. We say 4 (5-x) as “four brackets five minus x” but we say ƒ(x) as “f of x”. ⅝ is “five eighths” or “five over eight” but is “dy by dx”. Sums such as 2 + 3 = 5 we say as “two plus three equals five”. “Equals” is a singular verb but shouldn’t it be plural, as in; “Brian and Bill are boys”? 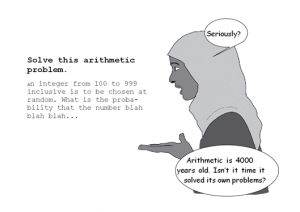 The above examples can only contribute to the unpopularity of mathematics for they show that its language adds a layer of complexity to a subject that already drives people mad with its convolutions. So how do you awaken interest in it?

Now, don’t cringe, but maths can be fascinating. Honestly. The world of maths is surreal and many of its people live the kind of dysfunctional lives that teenagers in particular should find an affinity with. It’s always more interesting to study people than ideas and mathematicians are good mediums with which to present the language associated with them.

Take Pythagoras, for instance, he of the right-angled triangle and circle theorems. Pythagoras was a hippy-like music obsessive on a permanent acid trip, who heard the sound of the planets as they moved through the universe. Florence Nightingale, who invented a type of graph, spent many years in bed. Leonardo da Vinci, who brought perspective and geometry to paintings, rarely finished anything he started and John von Neumann – a real life X-man – was kept under armed guard because the military believed him to be of “a species superior to that of man.” 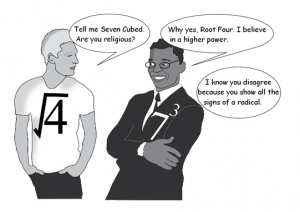 Maths can also be funny. OK, that’s arguable, but stand-up comedian Matt Parker makes a living out of it. And what about the Simpsons? You sometimes need to freeze frame episodes to spot them but the Simpsons is drenched in maths jokes.

With so much humour at our disposal there’s no reason why the subject and its language should be po-faced. A lot of maths humour is derived from an interplay between the maths meanings of words and their prosaic meanings which lends itself to the creation of mnemonics that aid memory. Something like; “I draw the line at graphing” sets two uses of draw the line alongside each other. “You know what’s odd? Numbers that aren’t divisible by two” does the same for the word odd. Schoolmasterly jokes like these may not be very cool but anything that makes learning easier is worth a try, don’t you think?

Nobody likes a smart Alec

Mathematical formulae that involve lots of parentheses cannot be fully translated into words; but that’s at a mathematically complex level and probably doesn’t concern you. What is important is that you don’t have to be good at maths to teach its language. Focus on putting it into spoken English. Neither you nor your students need to get the right answers to sums, solve equations, find x or prove theorems. Just play.

You will find the material you need in maths text books, in the mouths of maths teachers and in recorded maths lessons on You Tube. There are also lists of maths terms online which you may find useful such as those compiled by the UK’s Department of Education:

Students rarely question why they have to study geography, biology or a foreign language but they frequently question the need to study maths. The question itself is a good starting point for teaching its language but you will never have to justify teaching mathematical English because your students will immediately see the point in it.

If you have ever suffered from arithmophobia then teaching mathematical English may force you to therapeutically revisit maths itself. You never know, being freed of the obligation to get the right answers may release your suppressed inner nerd and one day you may even hear yourself waxing lyrical about the elegant simplicity of Euler’s equation… or is that going too far?

Tony Grice has worked in the ELT industry for thirty-five years. He has taught EAP at universities in Turkey, China and the UK. Now he is a qualified technical writer and EFL course book author. His published books can be viewed at http://www.societyofauthors.org/writer-Profile?itemID=4279. He is currently working on ‘Mathspeak’ – an ESP course book for learning the English of mathematics.