Improvisation for the Theatre 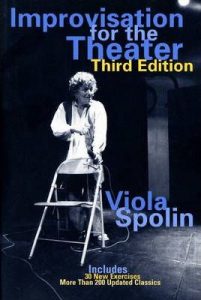 Improvisation for the Theatre by Viola Spolin, came into my possession buried in a pile of laundry. It’s dogeared, battered, tattered, and torn – though not unloved. It’s scribbled on and worked over.

Well, you know that frozen feeling you get when things go splat? It could be an observation, a class or an interview. You suddenly find yourself with time on your hands; a void which has to be filled with something meaningful. Well, this is where improv lives. Living in the moment, dealing with what is at hand, thinking on your feet, coming through and feeling at ease in uncertainty.

At over 400 pages it’s not a slim volume. But, in the words of Rob Reiner “her book is the bible.” This book.

As EFL teachers we are all actors and entertainers to a greater or lesser extent. Sometimes we are obliged to invent personas and characters other than our own to get our point across, often on a bad day when things are not going quite as we planned. So, in these situations it’s better if we are improvisators ourselves. It can save the day.

Now, I’m going to share just a few of the 200 games from this book. I hope these will give you hours of fun in your classroom.

When I go to California

First player says “when I go to California, I’m going to take a kite” for example. The next player then adds an object, then the next. When a player cannot remember the lengthening list he/she must leave the game.

For the second round, the objects are acted. Instead of saying “take my shoes” the students act putting on shoes.

Resist the urge to direct, rather let the student act it for themselves.

The third round is flexible, you can alternate between speaking and acting, or whatever you or your students can create.

This game is great for vocab revision, or indeed adverbs of manner – “put shoes on angrily” etc

Students write a word. It could be a simple four-letter word like “pine” on each turn they can change only one letter to form another word.

A player leaves the room. The remaining players decide on an idiom. Each of the players uses one word from the idiom in a sentence. The player who was outside listens to the sentences of the players, and from the repitition of the words tries to figure out what the idiom is.

Two players start, they begin discussing a topic they’ve both agreed upon. They try not to make the topic too obvious trying to be a vague as possible, while staying on topic.

Then if an observer, thinks he/she knows what they’re talking about they join in the conversation. If the original players think that the person is incorrect in his/her idea of what the topic is they can shout “bullshit” or “bluffer” for the PC types. Then that person whispers their answer. If they’re correct they stay. If not, they must leave.

Others can join when they feel they know. Or bluff.

What do I do for a living?

A number of students wait at a bus stop. They do what people do at a bus stop. Check the timetable, look at their smartphones, etc. Try to keep the students busy and prevent “hanging out” or idling. Try to get the students to infuse banal actions with the mannerisms of a particular job and have the observers guess what the job is.

Have students face each other in a conversation. Have them mirror the actions and expression of their partner. Keep the conversation going.

This could be varied to be a teacher of a subject or skill, working one-on-one or in a group.

Improv is a life skill. Teaching our students to think on their feet and speak without too much planning, but still in a careful and controlled way, is so useful, and not easy. Teaching them to do it in a language which is not their own is demanding but so rewarding when they become master of it. It helps in our EFL class on so many levels, but how much is it going to help our students in their future lives and particularly in their future careers to know that whenever they are in a tight spot and maybe lost for words, they can think about the improv skills learnt in their EFL classroom?

Philip is the founder of EFL Magazine. He has been a cinema manager, a chef, a sales executive and an English teacher. He learned the publishing trade at The Sunday Business Post in Dublin, and now lives in Tokyo. He is one of the founders of EdYOUfest