Film and television shows have universal appeal as an entertainment source in popular culture.

Yet while online video content is more accessible to teachers and learners of English than ever before due to the wide-reaching influence of technology, even with this access there remains lasting issues around materials creation using video. Authentic language forms used in dramatic television and film for English speakers are beneficial but only to a point, particularly with learners at lower proficiency levels who may struggle with distractors such as overlapping speakers or unknown cultural context. Furthermore, this form of content is designed primarily for entertaining and not educating. For English language teachers looking to create purposeful activities, it can therefore be a time-consuming process even just to identify a suitable video, let alone create support materials. It was with these considerations in mind, and a decade of experience in language teaching and filmmaking that I began the process of writing a narrative drama series, Fortune, designed specifically for English language learners.

In the reasonably long yet sporadic history of film for teaching (Kelly, 1969, pp. 250-254), it seems that decisions about the language have usually come first, with the narrative developed merely as a way of presenting the language; the assumption appears to be that since viewers will be watching to learn, they won’t expect quality entertainment. However, such a view seems out of touch with modern learner expectations. Never before have learners had such ready access to everything from YouTube videos to Hollywood blockbusters, and we believe this has created an increasingly sophisticated and discerning consumer group. With this in mind, we chose to take the opposite approach, beginning with the design of an engaging video series, and then shaping it to fit the needs of teachers and learners.

As Jamie Keddie reflects in Modern English Teacher (2017), “if we can immerse students in the narrative – language can become more meaningful.”

Along with series director Ben Woollen, we decided to use the popular detective drama genre for this project and began by framing a traditional story arc with strong, interesting characters that would populate the fictional world with twists, turns and suspense. With these elements in place, I then wrote a six-episode series, each episode designed to have a running time of approximately six minutes. Even at this early stage, we chose to keep the episodes at a length that would ultimately be most beneficial to learning and teaching opportunities.

Now it was time to consider the learning purpose within each episode, and then begin to re-shape the series accordingly. It was important to keep returning to the motivation for creating the series – engaging learners with a dramatic story while incorporating language for materials creation both in classroom use and for self-study. The opening step was to identify grammar structures from the Common European Framework inventory. In consultation with a team of language teaching professionals, we made an ambitious decision to focus on two scenes in each episode and to modify the dialogue within these scenes at A2 and B2 levels. This would give us the necessary scope to later showcase learning opportunities across multiple proficiency levels. We next identified scenes involving a useful communicative action, such as making requests, telephone calls, or a complaint in a service encounter. These scenes would provide a platform to create a rich variety of learning activities in the materials creation stage. A crucial decision we made was not to emulate the standard approach to language education films where language points are hammered home with multiple contrived uses of, say the present perfect, which inevitably detract from the storyline. Rather, we elected to provide additional supplementary videos so as not to compromise the entertainment value.

Armed with these language choices, I returned to the original scripts. This was an exciting period as the connection between the narrative and learning opportunities came into focus. The second draft required several steps to ensure meeting the standards required at each level. First, I had to embed grammar modifications to the highlighted scenes without losing the natural flow of authentic interaction. This was a difficult process that required a number of rewrites but would become crucial during production for establishing consistent language benchmarks. The second step was to review the vocabulary used in the first draft of the script. This required consideration of language at word and sentence level based on our anticipated audience across two levels. The decision was made here to maintain existing words and phrases that would be considered ‘stretch’ vocabulary but only if they could be used purposefully in teaching and learning activities.

It was now time for the nerve-wracking transition from page to action. Actors (at least the good ones!) naturally have a very good understanding of how words can be manipulated with action to deliver a believable message. One of the key challenges was to resolve the tension between a) the demand for comprehensibility and b) preserving an authentic delivery style. What we wanted to avoid was the kind of stilted and unnatural delivery that has become associated with most other videos for language learning. Working with the core cast, director, script supervisor and other key production members, we ran a series of roundtable workshops breaking down the script, audio recording dialogues and then reviewing the pacing, tone and delivery of lines. This was time well-spent as we needed to find a balance between acknowledging the target audience (English language learners) without losing dramatic effect. Over table reads, discussion and rewrites, we arrived at a place where the scripts met our objectives both from a narrative and pedagogical standpoint. We were ready to begin production! 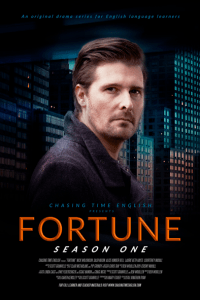 Scripting material for video is only the beginning of the production and materials creation process. There were many more steps before the Fortune series became what it is today: a completed narrative drama series with supporting teaching and learning materials. Our team consisted of over fifty individuals, each person playing a crucial role in the overall success of a multi-layered project. What was important, even at the early stages of creation, was the necessity to remain focused on the goal of creating engaging video content with a strong learner focus. I believe that has been achieved.

What are your experiences of using narrative drama as teaching resources in the English language classroom? I would be interested in hearing your feedback.

Scott has worked in the media and education sectors for over 15 years in New Zealand, South Korea, Australia and the United States. He has extensive experience and post-graduate qualifications in English language and literature, research and mentoring. An experienced lecturer, teacher and coach, and with more than a decade of leading complex creative projects, Scott enjoys being challenged in collaborative and education-based work environments. He is also an award-winning short filmmaker and author of three illustrated books for children.

Things I’d Wish I’d Known Before Starting My School in Japan I arrived in Japan in June 1999, after almost 20 years working as…