As a zealous, overly-confident, but ultimately well-intentioned newly qualified teacher, I cherished the responsibility of attending parent’s evening, primarily due to the sense of significance it afforded me and ‘my work’. I would sit on my throne and hold court with a succession of acutely attentive parents who obsessed over my every word, affording me an importance that is seldom granted elsewhere in life.

The majority of the learners who attended the school I was working at were of Indian, Pakistani, or Bangladeshi heritage. I had already become accustomed to the effortless generosity of these cultures. Deeming (accurately) that a young unmarried man would be unable to successfully look after himself, some of my students’ mothers took pity on me, and I would frequently find plastic containers full of delicious food waiting for me on my desk in the morning.

However, the most intense experience of the respect my students’ parents demonstrated for teachers occurred on one of the aforementioned parent’s evenings, when I was approached by the middle aged Pakistani father of one my most delightful students. As I stood up to greet him, I suddenly found myself in a powerful embrace, which was quickly followed by two rather furry kisses on my cheeks (the gentleman had a substantial beard).

The gentleman said to me:

“The teacher of my son is my teacher, Mr Fletcher. Thank you for all you do.”

The evident respect of my student’s father for the teaching profession pleased me. Teaching is often presented as a ‘noble vocation’, and the esteem in which educators are held in traditional societies has numerous manifestations, even today. At the end of a course I taught at a Turkish University, one of my students asked (half-jokingly) if he could kiss my hand.

At the beginning of the one-on-one classes I taught him, the far older and wiser First Secretary of the Japanese Embassy in Amman refused to sit down before I did, explaining that it was dishonourable to sit while the teacher is standing. In Saudi Arabia, my students would yelp with horror when I bent down to pick up some rubbish or sweep the floor, insisting that they should do it instead. As a young man at school in south east London, we would stand when the teacher entered the room, and wait for permission before taking our seats.

Some may consider these examples to be shallow affectations of an age that has passed. I see them as the residual afterglow of a quickly receding metaphysical system, which afforded honour to the teacher due to the profound responsibility placed on her shoulders.

In traditional societies, the teacher was expected to be knowledgeable in her subject and capable of communicating that information effectively. But she was also much more than an instructor. She was expected to be an exemplar of virtue and goodness. She was considered to be a source of wisdom, whose experience enabled her to offer timely advice and guidance to her learners.

She was a motivational speaker, a story teller, and a comedian rolled into one, and she viewed her task as far more than just preparing learners for exams, if exams even featured in the educational process. She was tasked with facilitating the holistic growth of her learners, an assignment, which extended far beyond her subject matter into the realm of concern for the wellbeing of those whom she took care of.

Having reflected on the changing nature of the teaching profession, I have constructed a (far from unique) hierarchical structure that I believe best represents the elements that constitute the role of the teacher described above, the educator who perceives her role as not only to present information to her learners, but also to touch their lives by offering guidance and support (when sought) that will aid them on their journey through life.

The lowest level is that of the instructor, followed by the coach, before the hierarchy culminates with the mentor. The characteristics and responsibilities of each stage will be discussed in detail below. 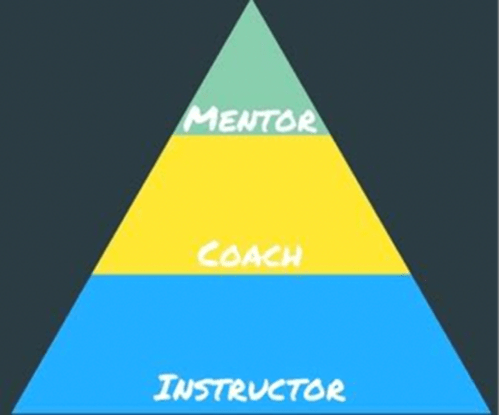 The instructor is responsible for facilitating access to subject matter in a meaningful and engaging manner. For the language teacher, the instructor must be familiar with the structure of the language itself in addition to theories as regards how languages are learnt, and be capable of identifying and addressing learner’s linguistic strengths and weaknesses.

It is at the instructor level that the overwhelming majority of teacher training courses and professional development programmes are aimed, for example exploring ways in which grammar can be effectively presented or analysing the advantages and disadvantages of using authentic materials in the classroom. The instructor’s primary concern is with content, and ensuring that the academic needs of learners are met. Without instructor level skills, it is very unlikely that a teacher can be effective. Instructor level skills are also the easiest to teach and acquire.

The coach acknowledges the impact of affective factors on the learning process, and steps beyond the academic content of the class to help learners achieve their objectives. At the lowest level, the coach may touch upon study skills, and encourage learner autonomy in reference to a particular learning objective.

At the highest level the coach supports the learner beyond the classroom, exploring the learner’s motivation and purpose in studying, and suggesting ways in which the learner’s overarching life goals can be achieved. This often involves discussing learner psychology and mindset, in addition to practical considerations such as time-management and access to useful resources. The main distinction between the instructor and the coach is the extension of the teacher’s role beyond immediate content-related goals into the realm of a learner’s holistic development.

The fruits of the work of the coach may not be immediately observable by means of exam results or improved academic performance, but are likely to manifest in teacher evaluations and enhanced learner self-confidence and self-efficacy.

While an educator can aim to be a coach and incorporate aspects of coaching into her practice, the educator cannot choose to become a learner’s mentor. The learner selects his mentor. The mentor-learner relationship is built on a deep trust and respect usually developed at the coach stage.

A mentor is a respected elder who has developed a sufficiently meaningful relationship with a learner or group of learners to be able to exert a positive impact on their lives, both academically and beyond. The mentor may provide advice connected to practical matters like career development, overseas study plans, or challenging decisions that the learner faces, and might even extend his guidance into the moral or metaphysical spheres.

It is through these relationships that learners access different perspectives on existence, and young people can benefit from the experiences, and even the mistakes, of their elders. While the mentor relationship may continue to touch on academic matters like study skills and subject content, the respect afforded to the mentor means that the engagement is seen as life-shaping, and produces advice and guidance that the learner remembers decades later.

Due to the often overwhelming demands of the teaching profession and the inevitable impact of personal characteristics and preferences on the teacher-learner relationship, it goes without saying that not all educators can be a coach or a mentor to every learner they meet. This hierarchy was not produced to be used as a ladder up which every teacher must climb in order to be deemed successful or effective.

There are many learners who do not wish to be coached, and still more who would find the concept of being mentored by their English teacher absurd. Rather, the hierarchy exists to remind educators that, in the midst of exams, lesson observations, and heavy workloads, the role of the teacher still contains the potential for life-shaping transformation. Should the circumstances permit, the educator has the capacity to exert a profound impact on the learners in her class, which extends far beyond academic performance.

It is clear that modernity has an enormous respect for education (or perhaps more accurately, qualifications), and that the unprecedented advances in technology, medicine, and communication witnessed in the past few decades have made the world a far more comfortable place to live for many of us. However, while seemingly endless quantities of information have become accessible to the majority of the world’s population, more than ever, young people are in need of wisdom, personalised support, and meaningful guidance to help them negotiate this ever more confusing world. I believe educators who resume their traditional roles of coaches and mentors have the potential to be a source of inspiration and help, the consequences of which could be felt globally.

We never really know which of our learners has the potential to exert a positive impact on the universe, and by taking an interest in their holistic development, we could be the spark that ignites their journey towards greatness.

Michael has taught EFL for almost ten years. In addition to working in the UK, his teaching career has taken him to Syria, Jordan, Saudi Arabia, and Qatar. He is currently working at a university in Turkey. He has completed an undergraduate degree in Philosophy and Theology at King's College in London, a Postgraduate Certificate of Education from the University of Cambridge, and an MA in TESOL from the University of Sunderland. He is currently staggering his way through the Delta. His research interests are holistic education and human growth, psychology and language learning, and language coaching.

Christopher L. Miller A Challenge Embraced A few years ago Dr. Thomas Farrell gave a plenary talk at the KOTESOL International Conference. Among the…