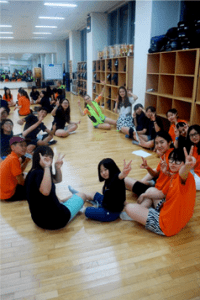 The summer of 2014 looked a bit different for me than for most other university students back home. It took place in the muggy August air of Jeollanamdo—an agricultural province on the southern coast of South Korea, which also happens to be the warmest.

Since high school, I had always been drawn to the idea of teaching English abroad. When I discovered that my university offered students the opportunity to participate in a government sponsored program to teach at a summer camp in South Korea, I needed no convincing to apply.

The Jeollanamdo Office of Education organized a three-week English intensive camp, inviting American university students to teach alongside Korean university students at two different locations. My group taught 8th grade students for 10 days, had a 3-day break, and concluded with a 9-day camp for 6th grade students. During the 3-day break, I opted to stay at a Buddhist temple tucked away into an unknown mountainous area of the province.

Although only a month long, the program provided an abrupt but thorough introduction to teaching ESL abroad. Here’s a peek into what my rollercoaster experience teaching at an English summer camp in rural South Korea looked like!

During a 4-day orientation in the coastal city of Mokpo, I fought off jetlag, got accustomed to the daily meals of rice and kimchi, and got a crash course on teaching methods and what to expect over the next few weeks. Although students were accustomed to being drilled with grammar and reading practice at school, this camp offered a very different opportunity for the kids to become immersed in the language day and night.

The 8th grade program offered fun classes such as sports, health, and cooking—which my Korean co-teacher and I chose to teach, because of our love of food. On the curriculum was a dictionary of useful cooking vocabulary (i.e. stir, whisk, mix, etc.) and a host of recipes to demonstrate live in class. Who in their right mind could pass up the chance to cook pancakes and cookies with hundreds of middle schoolers for a week?

Each pair of co-teachers was assigned a homeroom class where we did group activities at night when the academic part of the day was over. One of the first tasks assigned on day one was having students take up an “English name” to better step into an English-speaking persona during their stay at camp. Among the over 300 students that came through my door, Coke Bear, Father, and 2000 (we tried to convince him otherwise) were among the most ridiculous, although memorial names.

The first camp opened with a classroom full of terrified wide-eyes, but ended with a close-knit group of friends who skipped arm-in-arm through the halls and happily blabbered away in English to me. English wasn’t scary at all, they quickly found.

Three Nights at a Buddhist Temple in an Unknown Location 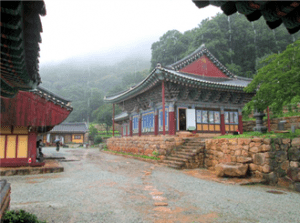 As our 14-hour days came to a close, our 5 AM wake up calls in a remote part of the peninsula were about to begin. While our Korean co-teachers relaxed back home for a few days, American teachers were given the opportunity to experience an authentic Buddhist temple for a few nights. The only snag in the grand plan was the fact that a typhoon was moving in and none of the monks spoke more than a few words of English.

Before the sun rose, we were all woken with the banging of a hollow wooden drum, signaling the start of the day in the grand hall. In a daze, we all mumbled mantras that none of us understood and bowed forehead-to-floor a number of times before the monks dismissed us back to our rooms. Breakfast followed soon after, with more worship, meditation, and what had been planned to be hard labor. For better or worse the hurricane-like weather meant that we were off the hook, and instead of labor, we hiked across the mountain—hardly a better alternative, in my opinion.

We went through our days at the temple with little idea of the significance of our actions. However, I left with a few formative takeaways.

3) I had never visited a more peaceful place.

Heading into the 6th grade camp, I wouldn’t see peace for another nine days.

The 6th Grade Camp with Daughtry, Jollee, and Man

Due to the popularity of my cooking class among students in the last camp, I again opted for the food related class with the younger students. Whereas communication was never an issue with the level of English skills the older children possessed, the younger ones presented me with a new challenge. My co-teacher tried to translate as little as possible into Korean, so we were left trying to find creative gestures and ways to speak to them.

Their English names were no less strange than with the first set of students. Daughtry was the resident troublemaker of my homeroom, intent on extracting every curse word of the English language from me (that I refused to give). Man was one of the smallest boys of the camp, but even at his young age and stature, boasted to everyone that he had a girlfriend. Jollee was a timid, well-behaved girl also in my homeroom, who despite her terrified look when called on, finished the camp by giving me a lengthy letter of appreciation and gift.

After working out the kinks in lesson planning and disciplinary actions in the previous camp, the 6th grade session past by in a blink. The closing ceremony had more teary-eyed children and hugs than I would have ever thought possible only a few days before.

Non-verbal communication is universal. When words failed, as they sometimes did, both my students and I had to rely on alternative forms of communication to express ourselves and to overcome language and cultural barriers. A simple smile, for example, came to have enormous meaning for the students that struggled expressing themselves in English. It was a form of encouragement from me or a sign of trust from them.

A favorite expression of affection from the students was to give gifts to teachers throughout the camp. During the students’ sacred snack time which occurred once a day between lunch and dinner, some fanatic students would give up their precious snacks to a few select teachers.

Kids will be kids

Working with young Korean students ranging from ages 11-14 provided a unique opportunity to observe how similar children are around the world. Being slightly less affected by social norms than their adult counterparts, I realized just how similar the students, especially the younger 6th graders, are to children in the United States. They tend to have short attention spans, require more repetition than their older peers, ignore teacher commands, release every ounce of energy when given the chance, and are sometimes insensitive to their classmates’ feelings.

Seeing kids run, screaming through the halls during breaks or coolly walking in their chosen cliques or having side conversations when my co-teacher and I were directing class made me realize that these kids were just kids having fun at summer camp.

My time in South Korea taught me that behind culture and societal norms, we are all essentially humans with the same basic forms of expression, like smiling or gifting to show affection. However, forming deeper bonds with people requires a common language, which builds a stronger trust and understanding. While my Korean co-teacher and students would chat away and giggle outside of class, I stood nearby as an outsider and could only wonder what they were talking about.

The American teachers were faced with a linguistic hurdle that only Korean speakers could cross to really bond with the students. Language holds a far larger importance in human communication than most people realize. Growing up bilingual in English and Spanish, I have always had an acute sense of the significance of language in helping decrease cultural barriers.

Language unlocks a whole new world of people that may have previously been unavailable due to inability to communication. Non-verbal gestures only take you so far.

Until my former students become fluent English speakers or I wake up one morning with perfect Korean, I will just have to be satisfied exchanging cookies and little smiles with them if we meet again. The largest lesson that teaching at the summer camp taught me was just how large a role language plays in our lives.

This realization made the experience of teaching ESL that much more valuable. Students were learning more than just a language—they were unlocking a whole new segment of the world to communicate with.

Raquel is a US-native who has taught English in both South Korea and Germany. She is also a contributing author for Teach.com, a resource for online degrees in school counseling, teaching abroad and careers in education. In her free time, she enjoys writing about her experiences abroad and petting dogs.

Raquel is a US-native who has taught English in both South Korea and Germany. She is also a contributing author for Teach.com, a resource for online degrees in school counseling, teaching abroad and careers in education. In her free time, she enjoys writing about her experiences abroad and petting dogs.

What’s the Point of Articles in English? Many years ago, when I was a new teacher, I taught a 5-day one-to-one intensive English course…